Panama – From the Canal to the Kuna Indians of San Blas. 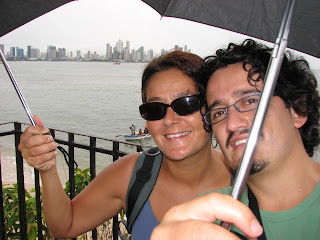 I am not really sure as to exactly what I was expecting of Panama….but I have been pleasantly surprised. I kept hearing that it was really Americanised or westernised, but thus far, I have not found that at all. What we have found however, is a multicultural metropolis in Panama City (where we have hooked up with an Alaskan called Robert, aka Paco, and are really enjoying his company) , and an Archipelago called San Blas which appeared to come out of a time machine . 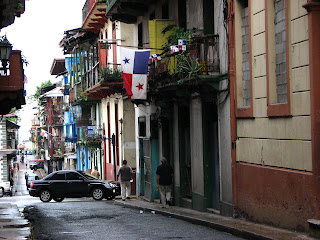 Our first few days were spent in Panama City, just strolling around, and taking in the city sights. It is quite a big city, with lots of variety. The business district, with all of its commercial to-ing and fro-ing could well be Melbourne…..just more hectic! The Old City centre (Casco Antiguo) is a fascinating labrynth of cobbled streets and colonial places, many dilapidated, dating back hundreds of years. And the the Panama Canal is an engineering feat of mind blowing magnitude! 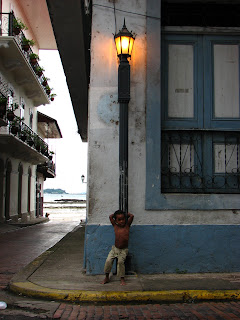 No trip to Panama could possibly be complete without visiting the Panama Canal. It is one thing to see it on television, but altogether another thing to see it “live”! The Panama Canal is 80 kilometres long from the Atlantic to the Pacific. It was cut through one of the narrowest and lowest saddles of the long, mountainous Isthmus that joins the North and South American continents. Only keeping this information in mind, can one begin to appreciate what was really created here! 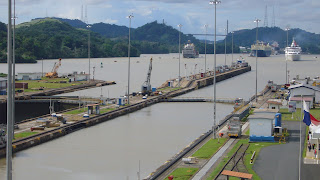 We went to the Miraflores locks, where we were able to see a variety of ships passing through; cruise ships, cargo ships, big, small, heavy, light. We stood transfixed whilst we watched for a few hours. The locks are quite close to the city centre, but buses come rather infrequently. Whilst waiting, we saw a linen truck stop in front of us and swing open its back doors whilst a couple of locals jumped in….with my finger always on the travel pulse, I called out and asked half-jokingly, if they had room for an extra couple of people. We were promptly told to jump in. As we sat, muffled and squashed amongst clothes in the back of a truck, going at a reasonable speed, with its back doors wide op 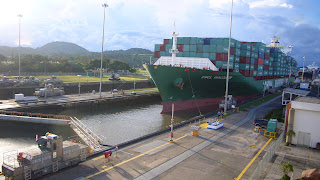 en….I could not help but feel a wave of excitement! It´s all part of the thrill, well the adventure at least! We later went to the Panama Canal Museum, which went into the knitty gritties of how, what , why, when. Check out their web site, www.sinfo.net/pcmuseum/

Always on the lookout for something different, unusual , or out of the ordinary (say I, after a ride in a linen truck!), we ended up doing a four day tour with an indigenous community in Kuna Yala (San Blas Archipelago), on the Caribbean side of Panama. I have done a few hilltribe and indigenous treks in my life, but nothing prepared me for this! 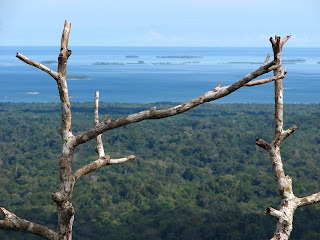 The Comarca de Kuna Yala, which includes the San Blas Archipelago, is a narrow strip on the Caribbean coast which runs all the way to the Colombian border. There are some 350 plus islands dotted off the coast line, and several of them, no bigger than a football field, are home to an indigenous group called the Kuna. Many islands are deserted, some have a solitary palm tree, another simply had two homes…..with the water’s edge as their fence.

Our trip began with a four wheel drive ride heading north east of Panama City, right through the guts of the jungle, and re-emerging on the Caribbean coast. The ride was…interesting…..bumpy, muddy, potholes, ravines with a drop of…..I did not look! Actually, the guide books do not even mention this road! Why? We found out that it was closed for years due to its appalling condition, and only reopened about a month ago! Adventure we wanted, adventure we were getting! When we “hit the end of the road” (aka, the bridge was recently destroyed by torrential rain), we had to get into a boat (hand made by the Kuna Indians) and actually make our way to the Caribbean. Nothing could prepare us, as we emerged into the Caribbean and saw a multitude of islands dotting the ocean. 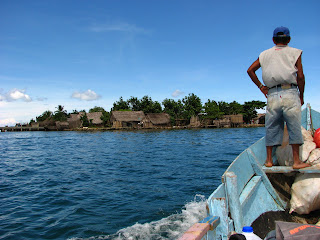 Was I in a dream? Was I seeing Kuna Indians rowing in hand dug canoes? Was I seeing tiny islands with bamboo huts? Was I seeing deserted islands that looked like sets out of Fantasy Island? I had to pinch myself! Yes, I was seeing it, feeling it, experiencing it! It was not a show, or a put on for tourists, this is really how the other half live! And for me it was a moment of revelation, and the reason why an expensive car or mansion could and would never compare!

Our first stop was the island of Carti Yandupo, a small oasis about 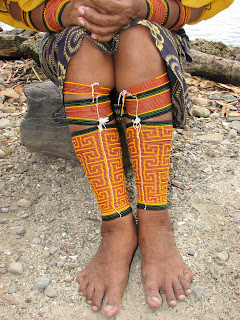 the size of two football ovals. And yes, we could clearly see the perimeter as the boat pulled up to the small but wooden pier. We were greeted by Nixia, who would be our (very modern!) Kuna guide and several other Kuna women. Their dress and style is very distinctive; beaded strands run the course of the bottom half of both legs, beads around both wrists, vibrantly coloured blouses with molas(traditional Kuna textiles), gold rings through their noses and black lines painted down their noses to ward off evil spirits. These women continue to dress as their ancestors did…..their world is real……and it could not possibly be any further removed from our own ¨real world¨.

The next few days proved to be amongst some of the most fascinating and thought provoking of my life! I felt like I had been transported to another world; a world so different to my own that at times it was hard to comprehend. They seemed to have so little, but yet they had so much! No cars, no TVs, no Play Station 3 ( I heard that in the USA, when this came out recently, a multitude of people had spent up to three days waiting outside the various stores to buy one??????), no Nike shoes. Where did we get it wrong? Another fascinating aspect about the Kuna is their honesty and gentle nature. We heard no fights, raising of voices or children fighting. They do not steal, and murder is rare.

The Kuna houses are basic, but distinctive bamboo huts, with thatched roofs, and floors made of sand. No wardrobes, no closets and no locks! And yes, we did keep our documents in our rooms, and no one dared touch what was not theirs. Theirs is a culture of respect, integrity and honour. This gave me a completely different take on ¨primitive cultures¨. Which one of us is actually living in an advanced culture, and whose exactly is primitive? Talk about food for thought! 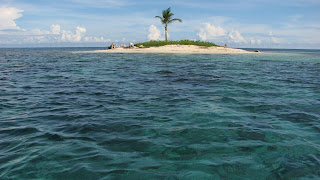 The next four days involved eating home cooked food, sleeping in hammocks, watching spectacular sunrises and sunsets, and snorkelling on tiny islands that could only be reached by boat. Did I mention sunbaking on deserted beaches with only one or two palm trees as friends? On the island we called home for a few days, we walked around and played with the local children and watched the women make molas, traditional textiles (Please take a look at http://www.galenfrysinger.com/Kuna_women.htm). I bought two of these molas, and it was not only a pleasure to buy something and be given their meanings by the persons who actually made them, but also be able to give something back to the very comunity that the products came from. I gave my money freely and lovingly! I had a br 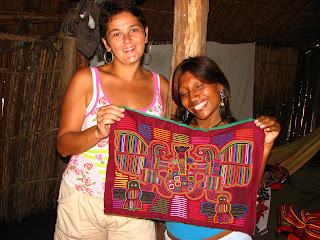 acelet made for me – one long strand, which when wound around the wrist, forms a geometric design. Ingenious really. I also had a line painted down my nose by Edith, Nixia´s mum. The material used is natural and comes from a seed called jawa. They say this is used for protection and ward off evil spirits!

This mesmerising experience, like all others, had to come to an end, and on the last day, as I jumped into the boat and waved goodbye, I had a knot in my throat and my eyes welled up with tears. I felt overwhelmed…..and then out of the corner of my eye, I could see a boat with a group of children waving. They were coming back from 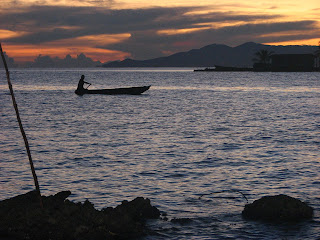 school, which for them is on another island, a short distance away….and there was my little friend Senen, with a big grin on his face and waving wildly! He was the child who with his gentle nature and soulful eyes, had had the biggest impact on me. I will never forget him…I can only hope that he remembers my goodbye to him the night before, when I told him that on the whole island he was my favourite! 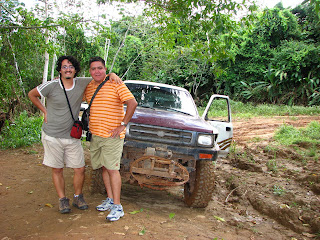 Dedication: Thank you to all the people of Kuna Yala, who touched my heart and helped change the way I view the world. Most of them will never know the long lasting impact they have had and will continue to make on my life! To Arquimedes, and his wife Edith who helped make our trip so special. And to their children Alejandro and Nixia who helped it come to fruition. Nixia, thanks for your friendship and for the portal into your world!