An early start meant getting up, catching a boat back across from Bastimentos to Bocas del Toro, and then catching another boat a further 45 minutes up north, along the Caribbean coast, to a place called Changuinola. I felt like I was in a National Geographic documentary, as the boat zipped through a narrow channel of water, with lush vegetation on each side, lots of huge tropical trees swaying in the wind, and a plethora of birds, who with their various tones, pitches and squawks, made us feel like we were in a magical paradise.

Changuinola’s only purpose, for us, was to be able to catch a bus to the border town of Guabito – Sixaola, which we did so with ease. A tid-bit of information – Changuinola is the place which brings much of the world the famous Chiquita bananas; I am sure that many of you have had these at some point. 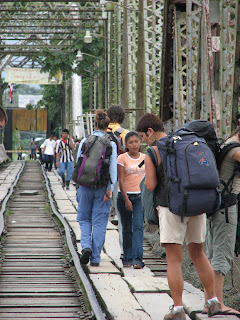 The border crossing was fluid, however, I was glad that we had an around-the world-ticket. The woman checking our passports on the Costa Rican side must have been having a bad hair day, as anyone who could not prove that they would be eventually exiting the country, was expected to go and buy a return ticket to Panama? Like that was going to make a difference! The bridge we had to walk across to enter Costa Rica from Panama, was trying, to say the least. A combination of metal and wooden slats, it had FAR too many gaps for my liking! With my huge backpack on my back, my smaller one in front, and not the best balance on earth, I breathed heavily and navigated to the best of my ability, and made it across with not a great deal of hassle.

Cahuita was our first destination in Costa Rica. Only a couple of hours up, on the Caribbean side, it had a decidedly laid back and mellow vibe. About a third of the people of this area are the English-speaking descendants of black workers who arrived in the 19th century to build railroads and harvest bananas. The majority of these people are bi-lingual too, speaking both Spanish and English fluently. It definitely has a different feel to the rest of Costa Rica. Having said that, the phrase “Pura Vida” (pure life) is never far from the average person’s lips. It is used as a greeting and to simply denote that life is good! We had a relaxing few days here, staying in the out of the way Cabanas (cabins) Iguana, in Playa Negra, a kilometre or so south of the town centre. The walk was definitely worth it, and night times consisted of relaxing in our wooden cabins or lazing on the hammocks on the porch in front of our room. The very cordial Riccardo, who worked there, was also always bringing us fresh grapefruit, star fruit, bananas and whatever other fruit he could find, and which was all grown on the property.

The highlight of Cahuita was undoubtedly the walk through the Cahuita National Park. Several coconut palms line white-sand beaches, alongside which runs a tropical trail filled with animals, snakes and birds. We saw a sloth, some cheeky white faced monkeys who tried to steal our oranges (as we snacked on them!), and a bright 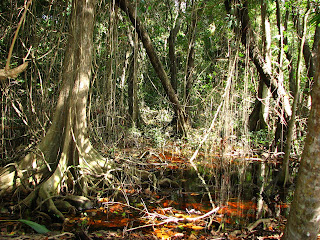 yellow eyelash pit viper snake. Alex was able to get right up, close and personal, as he took a photo of it wrapped around the branch of a tree. Unbeknown to us, and which we would later find out, this is one of Costa Rica’s most poisonous and venomous snakes! Part of the adventure, we would both remind ourselves! 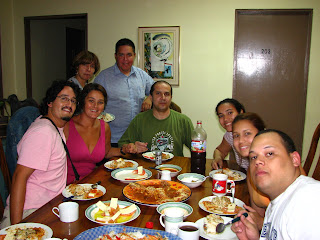 Next, San Jose, the capital. Although we actually found it quite unimpressive, we stayed in a great hostel, where we made some great friends. “The Red Parrot” was run by a Colombian, called Sandra, and Julian, who is also Colombian, worked there too. They were friendly and helpful, and kept a super-clean hostel (just the way I like it!). It is in this hostel that we met Noel, a Canadian journalist working on an English speaking paper there, and the gorgeous Carlos and Liyatze, from Venezuela. Although there was a kitchen in the hostel, we soon all figured out what a great cook Carlos was, and so we would all chip in for food, and he would cook! We had Venezuelan hot dogs (mine were soya) one night, arepas another (arepas are traditionally from Venezuela and Colombia, and are like thick savoury pancakes made from corn meal), and the piece-de -resistance, stuffed eggplant! Excuse my heightened sense of excitement and enthusiasm, but after weeks of beans, rice, eggs and fried plantains (cooking bananas), I felt like I had found “food utopia”! Being vegetarian in Central America isn’t easy – it usually consists of a normal meal….with the meat taken out! Needless to say, I have cooked a lot of my own meals, in places that haves kitchen we can use, as well as making a lot of my own salads, even if the veggies do come out of a can! 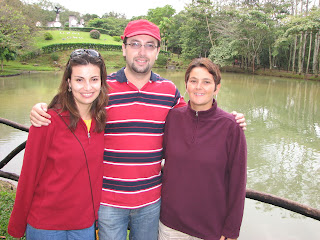 We also met up with Oswaldo and his wife Gina. Oswaldo is a friend of Alex’s from Ecuador, who works as a lawyer for the Inter-American Human Rights Court. We first met him at work, where he was able to show us around. This is the seat of all human rights cases and hearings in South and Central America and in parts of the Caribbean. We extended our stay in the capital, so that we could spend a Sunday with them both. We ended up at “Peace Park”, just outside the centre, amongst lots of greenery, in a relaxing surrounding, where we had a picnic and chatted. 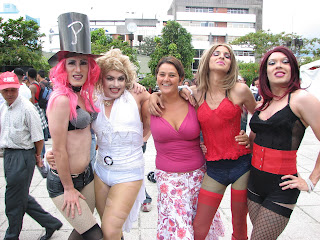 It’s NOT OK until we ALL say it’s OK!!! Whilst in the capital, we ended up bumping into a gay pride march. Good on them in homophobic Central America! Who cares what your sexual preference is! We are all all human and so have the right to live our lives without fear or persecution. I went up to a few people and expressed my solidarity. Remember that we are all a part of this world, and that lesbians and gay men will only feel “normal” when we all accept everyone as normal! 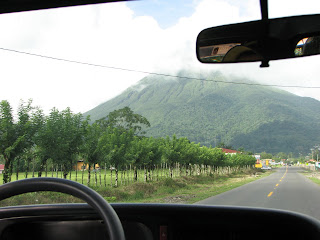 Our next stop, heading north, was the small town of La Fortuna, which lies at the base of volcano Arenal, which is still active. We stayed in a comfy little place called The Sleep Inn, which was run by the congenial…….Mr Lava Lava! Don’t you love it! Mr Lava Lava guaranteed us that if we did a tour with him that we would see lava….and indeed we did! The night we arrived he took us a couple of kilometres up the road, where we were able to see and hear some explosions, as well as watch red-hot streams of lava trickling down the cone of the volcano. It was breathtaking, especially as I had never been privy to such a sight. Alex, being an Ecuadorian, and having lived in a land full of active volcanoes had, in turn, seen similar things before. The next day we did a short hike to the base of the volcano, from where we could observe the arid and volcanic surroundings. Quite different to the lush vegetation we were accustomed to. Later on we went to the Tabacon thermal hot springs, as well as treat ourselves to a buffet dinner there (www.tabacon.com ) These springs were spectacularly set amongst the lush vegetation for which Costa Rica is known for. There were a great variety of different pools, and although relaxing, I found the price exorbitant.

Although our time in La Fortuna was brief, we felt that we had achieved what we came to do. Tomorrow, we would make our way to Monteverde, Costa Rica’s Eco-Adventure Playground.

“If you walk this Earth, let them know you were here”.