Jeep-boat-jeep was the way we got to Monteverde from La Fortuna. Let me explain. Option 1 takes you around the volcano, and switches buses to eventually arrive at the final destination some seven or eight hours later. Option 2, on the other hand, starts of in a mini-van (aka jeep), then does the next part in a small boat crossing a lake, and finally back in a “jeep” (yep, that’s the mini-van again), to arrive in Monteverde some two and a half hours later. Yes indeedy, we opted for option 2!

The very first thing we noticed about this small town was its much cooler climate. At an elevation of 1200m to 1600m, the fresh air was a refreshing break from the recent humidity we had been experiencing. This area is home to a couple of cloud rainforests and a biological cloud rainforest reserve, but its real draw card is all the canopy tours offered. We settled into a homely little place called “Sleepers Sleep Cheaper”. Again, it was cheap, and clean, and this time we were afforded some great views of the surrounding mountains. We had the use of a relatively large kitchen, and the owners Ronnie and Ronald prepared an excellent breakfast each morning. Glad that we had a “home-base” as the next week proved to be non-stop adventure! 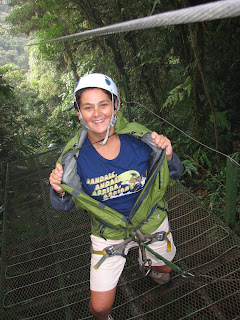 What is a Canopy Tour? A canopy tour consists of a number of cables running over and through the jungle/ rainforest. We (humans!) are hoisted up on a pulley, and then zip along from one platform to another. The cables vary from about 20 metres, to (the longest!) 750 metres. You zip from platform to platform, and it really is the closet thing to feeling like Tarzan or George of the Jungle! It is definitely for adrenaline junkies! There are a number of companies who run them, but my favourite was without a doubt, “Extremo”. This company only opened three weeks ago, and I found their cables longer, deeper and faster! We did Extremo in the afternoon, and the last cable, the longest at 750 metres, had us hurtling through a gorge, which was deeper than I cared to think about, but afforded us a view of the sun setting over the mountains and the bay, several kilometres into the distance (remember that Monteverde is in the highlands, not on the coast!). Wow, I was blown away! Extremo also had a rappel, which had us free falling for an obscene distance. Needless to say, I screamed all the way down…actually, I screamed before I left the platform! Although I had done the “tarzan swing” (yes, swinging through trees!) with some of the other companies, I just could NOT bring myself to do Extremo’s, at 2550 feet long, and 450 feet high. I tried, I really did! It was way too much like the time when I bungee jumped in Africa, way back in 1995, and I swore I would never do that again! Alex did it though, and said that it was amazing! What can I say, this tour certainly left me feeling on a natural high. Check out their web site, www.monteverdeextremo.com Who needs drugs and alcohol? Life is good! 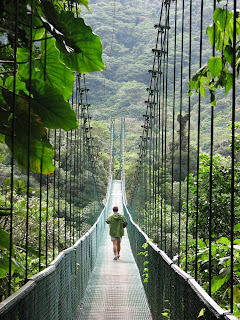 Not leaving you on such a high, but certainly worth doing, were the treetop walkways. These are a series of suspension bridges, whereby you can walk through the rainforest “from above”. Again, many companies offer them and we did a few. It was breathtaking to be able to view jungle life from a point up so high, and we were able to see a variety of different birds (such as hummingbirds), butterflies, and the odd animal. 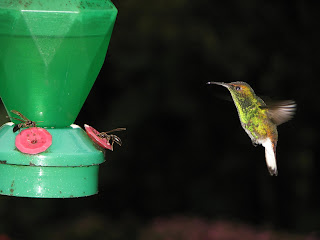 We also participated in some of the tamer options. We did the “Don Juan Coffee Tour” (www.donjuancoffeetour.com), where our guide, Gerardo, took us around a coffee plantation, and taught us about the entire coffee process, from the plant to the cup. We even met Don Juan himself. Although retired, he still made the time to come out and greet us, as well as happily pose for a photo! It was an excellent tour, and Gerardo an excellent guide (the best, so far, Gerardo!). They say that all good things must

come to an end….well, I don’t know about that….at the end of the tour we were given snacks…and as much coffee as we wanted! Can you see why I liked this place so much…..adrenalin and caffeine! We also did another cultural tour, called “El Trapiche”, which took us through the sugar mill process. This family-run project and tour actually included a bit of everything, including explanations about coffee, bananas and other crops as well. Again, the end seemed the best part, as we were given coffee, and a taste (as well as a sample) of a sweet made from pure sugar cane. 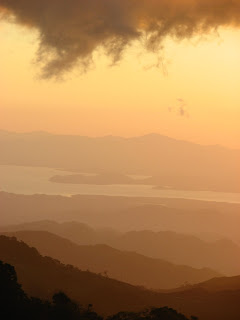 Now really, they do say that all good things must come to an end, and so after being culturally enlightened, drinking enough coffee to make an Italian coffee addict look lame, and practice random death defying acts…………it really was time to say goodbye to Monteverde, and move on.

Next: Our 3.00am start, and how we would cross the border in record-breaking time.

Note: As I type this on the 22nd of December, we are in Ometepe, in Lake Nicaragua, Nicaragua. We crossed the border on the 20th December. Alex and I would like to take this opportunity to wish all of you the most brilliant festive season. May you spend it in peace and surrounded by those you love. I would also like to dedicate this blog to my parents: To my amazing mother Adiga, who although died 13 years ago, continues to watch over me, guard and protect me. To my equally amazing father, Dino, who has been my mother and my father, and who proudly watches over everything I do, and always with unconditional love. I feel blessed to have been given the absolute best parents on earth!

“A challenge doesn’t build character, it reveals it”.