First of all……sorry about the delay in updating the blog, but we went through a 10 day patch of no internet accesswhatsover, and then another 4 days of very limited access! Story to follow later. How did we ever cope without internet?! 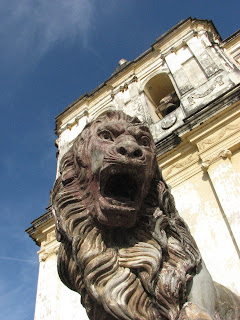 Leon is only a short (chicken bus…..well, kind of) ride away from Granada. Although it took us around three hours, this involved getting to the outskirts of Managua first, and then changing for Leon. Now remember, it was the day before New Year and all forms of transport were crammed full. We took a mini van both times, but it may as well have been a chicken bus as there was not a spare centimetre anywhere to be seen, or more to the point, to be felt! Trust us, cosy is an understatement! We had bags behind us, beneath us and on top of us, literally! And, as Alex would say, ¨Estoy sudando la gota gorda¨(I am sweating fat drops…of sweat). Once we arrived in Managua, we had to wait in a line for an hour or so, as several mini vans took off with the many people infront of us, who were waiting in ¨line¨. Ah, the concept of a line here is somewhat more blurred than back at home, and we both had to remind several individuals that the line was behind us and not infront of us! Hey, it was the day before New Year for ALL of us and we ALL had a place to get to!

We arrived at the central bus station in Leon, which was several blocks out of town, and right in the middle of a bustling market place. We were offered food, accommodation, chickens, drinks and more. The mind seems to go into shut off mode as one becomes focused on the job at hand, looking for a place of slumber! As we walked to the city centre, my first visual impact was how much rubish there was on the streets, actually, much more than I had seen anywhere thus far. As we walked I saw a number of people throw their remnants on the floor, and not in the, very few, bins around. Such a beautiful place, yet so much trash. Leon grew on us both, almost immediately, however, and so the rubbish soon became only a memory. My desire to change both people and habits overnight is strong at times, I guess.

Leon is hot, very hot actually, and as it is not set near any mountains or volcanoes, like Masaya, it is hot at night too. The residual overflow of this, is that one seems to constantly feel tired and lethargic. It took us a while, but we ended up staying at a place called ¨El Colibri¨(the Hummingbird), owned by an Italian/ Nicaraguan couple. At USD $15.00 a couple a night, it was a real bargain, taking into consideration that it included free internet and a fully equipped kitchen (and I mean fully equipped), not to mention that it is categorically the cleanest place we have stayed in since leaving Australia. Thank you Dona Consuelo for keeping the place so immaculate! And what a wonerful and warm woman Dona Consuelo was! We have had some amazing food and drinks here, including fresh shakes and smoothies, with fruit bought from the market, veggie stir fries, salads, and I even made pasta one night!

Leon and Granada have been ¨rival towns¨for a long time now, and it is not hard to understand why! Whilst Granada has a colourful, colonial and very right-wing vibe, its juxtaposition is the fleshy, outwardly leftist ¨taste¨that Leon provides you with! There is no lack of pro- Che and anything Sandinista here in this little town! In a nutshell, the Sandinistas were communist, and Somoza (the president at the time) and his ¨contras¨committed atrocities such as killing and torturing anybody that ¨wasn´t on board¨. We found out that the ¨contras¨ (the army that did all the killings) were on the USA payroll! Hmmmm!!!!! 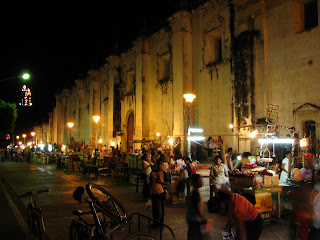 New Year was much more sedate here than I expected. We spent it with Paco (Robert from Alaska), and Joyce and Jules from England. We were hanging around the central plaza when “midnight struck”, but we felt that it was not on time and a little early. As we had met some other tourists and Aussies, we took it upon ourselves to do the ten second countdown……Aussie style! Now, we´re talking, this is the REAL New Year! With the formalities now all worked out, we made ur way to ¨Don Senor¨, supposedly the place to go boogie! There we danced for a couple of hours, and then went back home. I am able to proudly say, here, that I still have it in me to dance several hours without stopping. 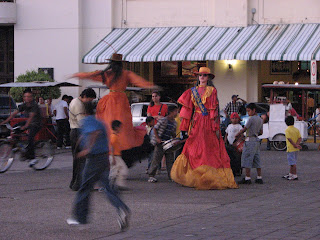 New Year´s Day was spent totally relaxing in the hotel’s outdoor hammocks.. More to the point, my body hit the wall, and I felt like I had been hit by a bus! No hangover here. As you know, I neither drink nor smoke, but it was my body´s way of saying, ¨Take it easy girlfriend!¨. We have been on the road for almost five months now, and I think I simply needed some R’n’R (rest and relaxation).

In the days after New Year, we walked around town, checked out some museums and went to Las Penitas beach, about 45 minutes away. For those who love literature, and know something about Central American literature ( I didn´t until I arrived here), we went to the Ruben Dario Museum. It is said that he is still Central America´s most famous poet and writer, although he died in the early 19oo´s.

After spending almost a week in Leon, which is longer than we usually spend in a place, it was, yet again, time to move on. We decided that our next destination would be El Salvador. The guide book says that it is the most ¨off-the beaten track¨ country in Central America…..but you will be surprised to find out, not the most dangerous! I will tell you later which one is!

And so, after packing and saying goodbye to our new found “family”, we were off once again!

“It’s not who we are that holds us back, it’s who we think we’re not” – Michael Nolan.

NOTE: A recommended link for Nicaragua is www.vianica.com Here you will be able to explore the entire country .

Share
PrevPreviousNicaragua – you are now leaving your comfort zone!
NextHow the other half….. lived…..and live!Next