A 3.00am start it was! After being told that all the inter-country buses were full, and that we would have to do it in ¨sections¨on the local buses, we figured that we should catch the first bus out. The bus we needed to catch was the 4.30ish bus ( I say ish, as everything is ïsh¨in these parts…things just happen…when they happen!), which would take us to the Pan-Americana Highway, from where we needed to catch a bus to the border. A bit of trivia: the Pan Americana is the main road which runs all the way from southern South America, all the way to the top of Central America. It is basically the heart beat of the Americas. 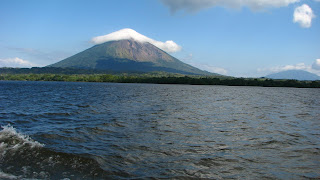 Luckily, the bakery was open, so just before boarding the first bus, we grabbed some bread! We took off in the dark, and some two hours later, we reached the highway! As it turned out, we befriended a Nicaraguan man, with whom we shared ¨breakfast¨with at the bus stop, waiting for the next bus! He too was off to Nicaragua, to spend time with his family. Pedro was so sweet, and really looked after us. When we finally boarded the Nicaragua-bound bus, at around 8.00am, it was packed to the rafters, but at least we got on. We had heard horrendous stories of the border taking hours to get through, especially being the festive season, but it was not too bad! And then we had Pedro, the local, showing us the ropes………..it was flawless, really, we crossed the Costa Rican border, to then have to enter and cross the Nicaraguan one. Heads tucked down, smiles on our faces, and following Pedro, we did it effortlessly! Welcome to Nicaragua! 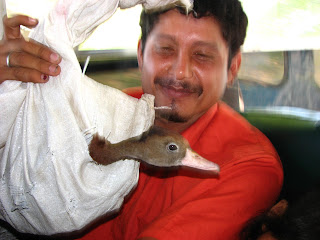 This place has a totally different vibe to Costa Rica; more hustle and bustle, more animated people, and in my (humble) opinion, much more -like I would expect of Central America! Yes, what we had been waiting for! We thanked Pedro profusely, as we waved goodbye and hopped on a ¨chicken bus¨for Rivas. What is a chicken bus? Humans, animals (large and small!), bags of food (also large and small) and whatever else can be shoved on! Yes, it´s a labour of love, where it´s all about sharing…everything…including personal space! If you are not into up close and personal, Nicaragua isn´t for you! As I sat there…..with humans, and food and animals poking their heads out of bags, I felt a sense of euphoria! YES, bring it on, I am ready for the ride! 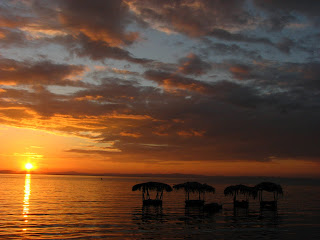 We immediately sensed how genuinely helpful and friendly Nicaraguans are. Whilst on the bus, another guy told us where we needed to hop off, in order to get a a short taxi ride to the dock, where we would then catch a ferry to Ometepe Island. He even bargained with the taxi driver to make sure that we did not get riped off! Alex and I usually do this, but it sure is nice to have someone else do it for you!

Ometepe is an imposing island, in the middle of Lake Nicaragua (which happens to be the 21st largest lake in the world, at 8264 km2, a litle bit less than Lake Titicaca in Bolivia, and the third largest in Latin America), which was actually formed by two large volcanoes;Volcan Concepcion, which rises 1610m above the lake in the perfect cone for which volcanoes have become famous for, and Volcan Maderas, at 1394m. The former is an active volcano, whose mouth is always shrouded in ¨mist¨. This island can actually be seen as you cross the border into Nicaragua, and it is truly a very sobering and majestic view. Despite religious beliefs or the way in which you beleive the world was formed, one cannot but stop and wonder about this amazing feat of nature!

The 45 minute ferry ride across to Moyogalpa, the island´s capital, was fine, apart from me suffering the usual minor symptoms of nausea (for those of you that don´t know, I suffer motion sickness: type of transport irrelevant!). One of the first things we noticed about Nicaragua was how hot it was! As opposed to Costa Rica´s lush and green landscape, Nicaragua is much drier and hotter, with nowhere near as much rain (it actually has not rained the entire time we have been in Nicaragua). On touching terra firma, we both realised how exhausted we were, but the usual ¨hunt for a home¨ was our obligatory first. Sometimes travelling can be hard yakka! Neither of us could be bothered to look, but it had to be done. We settled on a place called Hospedaje Central, which as the name suggests was central. 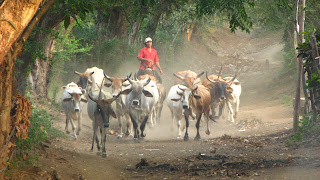 The guide books all say to make sure that you have enough money when you come here , as there are no ATM´s on the island. I should add here, that although the country´s official currency is the Cordoba (at almost 18 to the American dollar), American dollars are also widely accepted and used. Well, we saw history in the making..the day after we arrived, the very first ATM opened, and we were two of its first customers! I wonder how this will change things? For the better or for the worse? Time will tell! Our first few days on the island were spent chilling out. We felt that our bodies were starting to slow down. We walked through the side streets, chatted to people, played with the local children, and caught up with e-mails. It´s hard to move ¨fast¨on an island whose pace is ¨slow¨anyway! 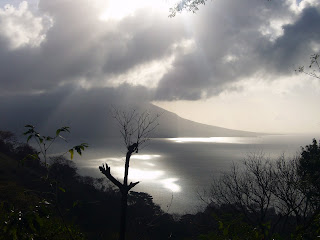 After a few days, we caught a bus 20 minutes away to a place called Charco Verde, where we stayed at a place called Hotel Finca Playa Venecia. This beautiful lush and untouched area was pristinely isolated. A truly unspoilt place, where we afforded spectacular views of ¨nature untouched¨, as it should be! A walk through close by Charco Verde Reserve, gave us rewarding views of both volcanoes, from a vantage point that could only be described as spectacular. Then of course there were the birds, parrots and monkeys.

This is where we spent Christmas. As most people want action for the festive season, there were only four others here, besides Alex and I. Joyce and Jules, from England, were two of these other people. On Christmas Eve, Alex and I sat outside, and made ourselves dinner, whilst looking at the serene lake infront of us…….and we felt very, very, very lucky! We both realised that tonight we would have much more to eat than many people in the world! To be perfectly honest (as my close friends would say, am I ever any other way!), we were both glad to be able to escape the Christmas commercialism and hype, as it has truly become an exercise in over indulgence and expenditure, and focusing on the not so important things in life. Our gifts are surely our lives and the capacity to be able to live fully! 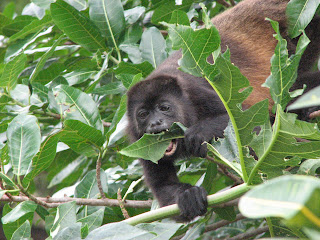 That night, the owners took us out with them, and we went for a bit of a boogie in the big smoke, Moyogalpa. We had fun, we chatted to the locals, and we danced…and I danced a lot! How did I have that much energy, a few people asked? I am glad that I still have it in me.

On Christmas Day, we hired some bicycles, and rode to a local watering hole. Local….well…….although the ride was only slightly uphill, it was hard work, in the searing heat of mid afternoon, and it still took an hour and a half or so. We stopped to grab a drink, as we were parched and dying of thirst, and although I am not a soft-drink fan, you have never seen me down a bottle like I did that afternoon! Whilst we were there, we met a boy who was on an errand to buy some cooking oil for his mum. I asked him if he wanted a soft drink, and his eyes lit up. Ah, the simple pleasures of life! If only we could see the merit in giving as well as receiving. It is the circle of life, the ¨balancer¨as I call it. 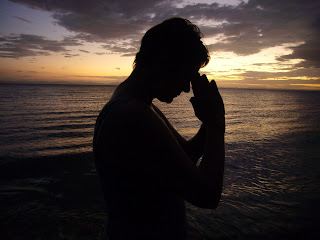 After a wonderful stay on Ometepe Island, it was time to move on.