Did I say El Salvador? Change of plans! 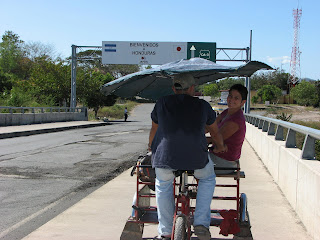 Another day, another border! The border crossing at Guasaule was easy and effortless, but then we are becoming old hands at this now! As usual, there is always a little distance between the final bus stop, and the actual border…..a way for the locals to make some money, which I have no problem with. As soon as we stepped off the bus, we were mobbed by several men, offering to take us to the border, on what looked like a three -wheeled bicycle with a canopy. We had some fun haggling, and got them down to 10 lempiras each (USD$1.00 is about 19 lempiras). As usual, you cannot make everyone happy, so to give a couple of people our custom, I took one bike and Alex the other. They were rather funny guys, and kept us entertained the entire(but short!) way. We thanked them and ended up giving them 20 lempiras each! Then, they jovially, but quite honestly, asked us for some money to buy a drink! We rolled our eyes, laughed and waved goodbye as we prepared to leave Nicaragua, and enter Honduras.

I know that there is no barbed wire, or fence, and that the border really is only an imaginary line, but every time I cross a border, I find myself marvelling at the fact that I am in yet another country! And so effortlessly too! We don’t have borders like this in Australia.

The idea was to catch a bus, and take the short ride to Chuloteca, where we hoped to stay the night, before continuing on the next day to El Salvador. Well, we got to Chuloteca, and………….decided that we would head straight up north, to the Bay Islands, in Honduras’ Caribbean, and do a diving course instead! We had planned on going there anyway, just changed our routing! Hey, we have the flexibility to do things like that.

We only spent the night in Chuloteca before catching a very early bus to Tegucigalpa, the country’s capital, where we would have to in turn catch another bus to La Ceiba, the farthest point north, from where we would eventually have to catch a ferry to the Bay Islands. Needless to say, it ended up being an extremely long day!

Honduras has a completely different vibe to Nicaragua. Amazing what a real (as opposed to imaginary) difference a border can make. We noticed how many men seemed to be wearing cowboy hats……a phenomenon we have continued to see throughout the country. I will remember Chuloteca for its big outdoor fruit and veggie markets, and for its ridiculously cheap rockmelons (around USD 27 cents each). We were later told that a lot of fruit is exported from this area. This would answer a later question as to why it’s sometimes hard to find good fruit and vegetables in Central America. They certainly have the best, but the majority goes off to the overseas market.

What can I say about Tegucigapla? Apart from its hardly known and difficult to pronounce name (te-guchi-gulpa), not a lot! Did you know that it is the capital of Honduras? For some unknown reason, most people don’t. I only found out once I began researching our Central American trip. Once we arrived, we had to catch a taxi to the other side of town, in order to catch the bus that would then take us to La Ceiba. This bus ride, was not on a chicken bus, but on a more comfortable, direct one. Alex and I actually like and prefer chicken buses, as you really get to see how the locals live, but we wanted to reach our destnation before nightfall. 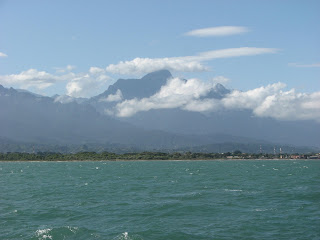 As it was, we arrived at dusk, and by the time we took the short (but long enough to walk in the dark with a backpack!) taxi ride to the city centre, it was already dark. We do not like to look for places to sleep in the dark, but tonight we had no choice. Obviously, no hotel out here had the aim of impressing a weary traveller, as most left us totally unimpressed. You can usually find a decent one, but here they all seemed run down, old and dirty! Yes, the dreaded “D” word! Not happy Jan! We settled on a place called The Colonial, which was a series of small hot boxes set in concrete going several stories skyward. Usually quite happy with a fan, this was going to be a no-go-Joe in this building. Luck was on our side, and we took an air conditioned room for marginally more than the price of a room with a fan. Usually, air-con rooms are double the price of the other rooms, as electricity in most parts of Central America is expensive. 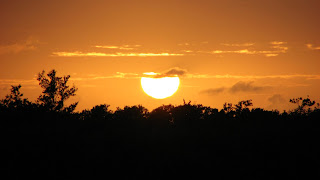 There is always that”aaaaaaaaaaahhhhhhhhhhhhhh” feeling when you finally find a place to stay. Comfort and relief! Until the next move, of course! Finding a bite to eat was mission impossible. We had no map of the town, and no idea of where it was and was not safe to go. I settled on a Nescafe cappuccino from a petrol station, and then we found a shop which made fruit juices and smoothies. You would be surprised at how easily they can fill you up! I had the cocoa, granola, banana and milk one, and Alex the papaya, oats and milk ………..both without sugar! It’s a Central American thing – they love to put a cup (yes, a cup!) of sugar in each blender full of juice. It kind of defeats the purpose!

That night, we felt blissfully happy to have taken the decision to indulge in the air-con, otherwise we may have well woken up roasted little campers, instead of happy ones!

Tomorrow, we would get up early, and take the 9.30am ferry to the island of Utila, in the Bay Islands.

Share
PrevPreviousWhat you have said about our journey and our blogs.
NextDiving Down Under, but Up Over!Next