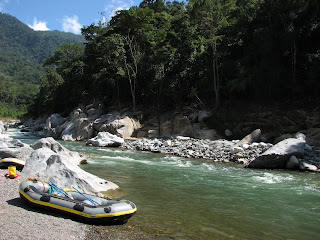 The ferry arrived back in La Ceiba at around 8.00am. We made our way to the city centre, where we headed straight for the tourist information office. Somebody had given us a good lead, Omega Tours. So after a quick phone call and chat with the very cordial Udu, originally from Germany, we found ourselves in a taxi, taking a 20 minute ride out to his and Silvia’s eco-lodge, where we would go on a rafting trip as soon as we arrived. Actually, they were waiting for us, as a group was just about to head off! No rest for the wicked! The days that ensued were yet again, action packed and full of fun and good food!

Omega Tours Jungle lodge is only 9 kilometres from La Ceiba, up a dirt road alongside the Cangrejal (crab) river. As we were driven up, we were presented with a spectacular view of a river cascading over rocks ranging in size from pebbles to boulders, and with a spectacular mountain range in the background. We arrived, dumped our stuff into a room, met Udu, and were immediately introduced to our rafting guides, Jeff and Ben. Bathers on, and we were off! After a short jeep ride to our destination, and a brief explanation of what not as well as to do, we were off…………rafting! Action packed is really the best word to describe our afternoon. This took me back to the Zambesi River in Zimbabwe, way back in 1995, which was the last time I went rafting. Absolutely no less fun though! My favourite part was the 2 metre drop, and we didn’ 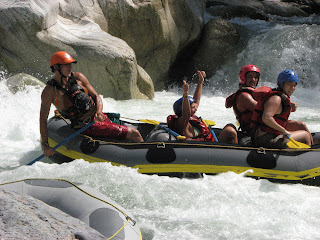 When we came back, we settled into our room, and properly met Udu and Silvia, who have an absolutely marvellous and self sustainable little operation happening up there in the hills, away from ¨the city¨which is, in reality, so close by. The guest houses are clean and comfortable, and there are a couple of very special cabins, and certainly worth the splurge. Check out their website, www.omegatours.hn The property also has a small orange orchard and various other fruit trees, not to mention excellent food. When I say excellent I should explain: Good quality, good portions and good variety! Bless beans and rice, but I must say I am a little over them! In Central America vegetable options are marginal and boring! It´s a meat lover´s world out here! 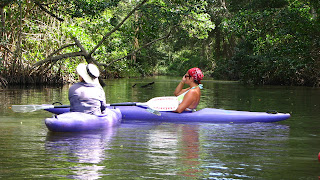 The next day was spent kayaking, also organised through Omega Tours. I know, some of us really do have it tough! Our guide was a guy called Alex, and he took us to the Cacao Lagoon, about an hour away. Exploring the lagoon and its mangroves was relaxing, especially as we were able to view birds and wildlife, such as monkeys. I 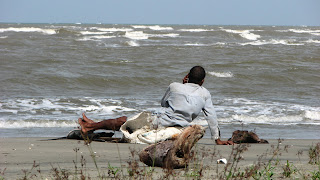 tried to ignore the fact that I was much less than an expert kayaker, often going around in circles and that the mozzies were having a meatfest on my back and legs! Oh, my legs…….be afraid, be very afraid. They are currently looking pretty tragic, with mozzie and no-see-um (these tiny, minute little evil critters that leave bites that itch like hell!) bites all over. I could be a walking advertisement for a join-the-dots colouring book! 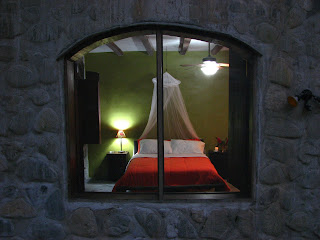 Alex and his wife Karen, are in the throes of opening a beautiful bed and breakfast right next door to Omega Tours Jungle Lodge – designed by Karen, and built by Alex. Alex (my Alex) did a contra deal – he would take photos of their superb property, and we would get a night in the B´n´B with breakfast thrown in! I think both parties were happy with the end result. By the way Karen, that was one seriously good (and varied!) breakfast – fruit, yoghurt, home made brown bread (with no sugar, which is the way they seem to like it here), veggie omelet, peanut butter, jam and superb coffee. I never knew that I could find utopia in a breakfast! Please keep your eyes open for their upcoming website, www.casacangrejal.com It should be up by March of this year, and you will be able to see some of the photos Alex took too.

The last week or so had been so full on that we decided that we truly needed a rest. By a rest I mean, no diving, no kayaking, no rafting, just some quiet time. A week earlier, on the bus going from Tegucigalpa to La Ceiba, we had met a lovely lady called Nelly, who had a guest house just outside of Tela, also on the Caribbean coast. She had told us that it was very peaceful and tranquil, yet right next to the beach. That gut feeling thing! We decided to go! The chicken bus ride, as always was enjoyable; mothers feeding their kids local food, men hauling sacks of onions through the back doors, groups of locals chatting about what they had done the night before, and…everyone looking happy! Smiles on their faces! 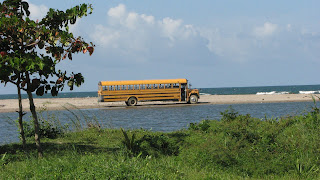 A word on consumerism: Many of the chicken buses to be found in Central America are old school buses from the USA (photo to the right). They are mostly all yellow, and they have swinging doors that open up at the back as well as the front, and………..THEY ALL WORK!!!!! My point being: this form of transportation has comfortably taken us from point A to B on a multitude of occasions in the past months, so why where they discarded in the first place? Well, here is your answer: We live in a world where (supposedly!) bigger is better, newer is nicer and keeping up with the latest trend is not only imperative, but necessary! Food for thought!

We arrived in Tela at dusk, and not wanting to navigate the bus system after dark we decided to take a taxi to Noni’s Plantation. As soon as we arrived we were greeted with a big hug from Nelly, and we soon settled into a small but comfortable room.

Noni’s Plantation is beautifully situated inbetween San Juan and Tornabe, on a peninsula very close to Tela. As soon as we were free of our backpacks, Nelly took us for a walk. No gravel, no bitumen, just dirt roads lined with very simple houses, yet right on the coast with breathtaking views. This area, amongst other areas along the Caribbean coast, is inhabited by the Garifuna people, who are the descendants of Caribbean Islanders and shipwrecked African slaves. Their language, Garifuna, is also reflective of their ancestry, with the language sounding like an African/ Indies fusion.

I felt like I had entered another country! People with a totally different look and language cooked coconut bread rolls in the streets, fished in simple canoes, and rode their bikes like we would drive our cars. I had to keep doing a mental reality check! By the way, that coconut bread was fantastic!

Apart from lazing on the beaches, and eating good food in simple places, we also walked the 6 kilometres to another place called Miami. Miami is a beautiful but basic Garifuna village on a narrow sandbar between the Caribbean Sea and the Micos Lagoon. I found Miami to be a little more primitive than the other Garifuna vilages I had seen, with the houses all being made out of traditional materials. It was a great experience, and a clear reminder that mod-con and flash is not the way in which we all live!

On the walk back we befriended Michael, a local boy of 13. He gave us some good tips on where it was and was not safe to walk. We all walked back the majority of the way, eventually jumping in the back of a pick-up, with the locals. Back in Tornabe, we sat down in the street and waited for the coconut bread to come out of the “oven”, whilst we interacted and chatted with the locals. It is the best way to get a feel for the people and their culture!

Although we only spent a few days in this area, we had a most refreshing time. Nelly and her husband Carlos, made us feel like we were at home. Nelly would often give us a taste of some of the local goodies she had bought, as well as coffee in the morning. Yet another unforgettable experience! When I hugged Nelly goodbye, we both had tears in our eyes, as she had now become another member of my “family”. As we jumped on the bus and waved goodbye, I wondered when we would see each other again.

NOTE: Sorry, I am about to jump on the political bandwagon again! Plans have now been approved, but the contender not verified: They are going to build a resort of Cancun style, magnitude and proportions on the beautiful strip of land that I have just been describing, near Miami Beach. The Garifuna are being “bought out”, and their dirt roads and basic houses will make way for “beautifully” paved roads and a palace that will stand out like a tumour! Why? Why can’t we be happy with natural beauty in a natural setting? Why do we want a holiday that consists of “our current life in a different country”? But mostly, WHY are we hellbent on ruining somebody else’s back yard at the expense of our own “comfort”? More food for thought!

Next: The fascinating world of the Mayan Empire – the ruins of Copan.

(Photos: 1.- Let the rafting begin! The Cangrejal River; the place where our rafting trip begun, near La Ceiba on the Honduran Caribbean Coast. 2.-Yes, what a ride! We made the 2 metre drop! 3.-Looking for monkeys on the Cacao Lagoon, near La Ceiba. 4.- ” Contemplation”, man taking a rest on the beach, near the Cacao Lagoon. 5.- Casa Cangrejal B’n’B. 6.- Chicken bus (old school bus from the USA), crossing the narrow sandbar, Tornabe, Caribbean Coast, Honduras. 7.- Garifuna children on a truck selling second hand clothes, also from the USA, Tornabe. 8.-Alex (”El Gordo”) participating in his favourite hobby…….eating fresh fish in Tornabe. 9.- Fresh coconut bread rolls, straight from the oven to you! Tornabe. 10.- Kids playing on the beach in Tornabe.)

0 thoughts on “The Honduran adventure continues.”

This site uses Akismet to reduce spam. Learn how your comment data is processed.

Any cookies that may not be particularly necessary for the website to function and is used specifically to collect user personal data via analytics, ads, other embedded contents are termed as non-necessary cookies. It is mandatory to procure user consent prior to running these cookies on your website.