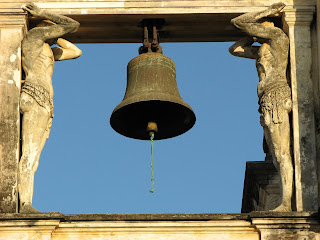 Alex and I would like to share some of our thoughts and feelings on how other people live and what they have actually lived! The following takes place in Leon, Nicaragua.

On entering the “Galeria de Heroes y Martires” (the Heroes and Martyrs Gallery), the visual impact of hundreds of photos of faces stuck up on several boards was overwhelming! Most photos did not have a frame, some were old, many faded, but they all bore the person’s name, and date of birth as well as the date they died. Most were young, and fresh faced. I noticed that there was no “cause of death” beneath any of the photos! I would soon learn why!

Dona Concepcion Toruna is one of the mothers of the “Frente Sandinista de Liberacion Nacional” (a pro-Sandinista group) veterans and fallen heroes. She is slight set with short neat hair, and is the woman who will give us the tour. Tour? The gallery has photos of over 300 local revolutionaries who died fighting the Somoza dictatorship. Dona Toruna took us around, and simply stated who many of the people were and how they died. They all died for the same reason. Simply……they had had an opinion, they had defied their brutal dictator and dictatorship……and the penalty for having an opinion was death! 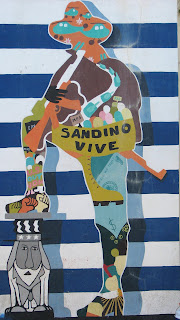 As we went from photo to photo, with Dona Toruna explaining as much as she knew and could remember (as she had lived that era) I felt numbed. I looked at each of those photos, read the names beneath……..and tried to fathom what those individuals had been like; did they like reading, did they have siblings, a lover, a passion of some sort. Had they left behind children? What jobs had they held? What food did they like? What was their favourite colour? So many young and wasted lives. As Dona Toruna talked, I was wafting between my own little world, and the world that these people had perhaps lived in. It felt surreal!

I was suddenly vortexed back into my reality, when Dona Toruna pointed to yet another photo, and I heard the words “my son”! My son! Here was a woman pointing to one of the fallen and explaining how he died! I wafted away again! I did not catch how he had died! But here was a woman pointing to her dead son! Life is not supposed to be like this, children are supposed to outlive their parents! Tears welled up in my eyes, and a lump formed in my throat, and yes I did cry! I cried for her son, and all the fallen victims, and for all the innocent people who continue to die today because of ignorant people and their ignorant ideals! I am vehemently anti-war! It’s usually always about somebody’s power struggle with absolutely no regard to anything or anybody else. I was away somewhere in la-la land, when I heard the words, “my daughter”, it was Dona Toruna pointing to yet another photo! This woman had lost two children to a dictatorship that simply wished to anhialate the “enemy”, yet she stood infront of us to tell the tale. The tears were streaming down my face. She came up to comfort me, and to give me a drink of water!

This woman was an inspiration! She told us that she did not feel bitter about the deaths of her two children, because they had died for a cause they felt so strongly about! What a woman! She is a greater one than I will ever be! 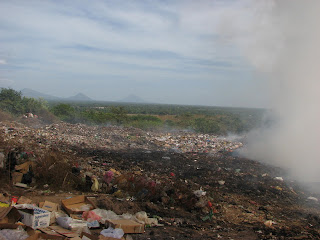 That same day, we decided to walk to El Fortin, the National Guard’s last holdout in Leon. It was used by Somoza and his crew to jail and torture people. It was supposedly under 3 kilometres from the town. “Follow this dirt road 2.5km until you reach the abandoned hilltop fort, which affords a panoramic view of Leon”, said our guide book. We walked a fair portion of it, when we were asked by a couple of men in a ute, if we wanted a lift. Doing so is commonplace in Central America, and we obliged. There were a few others, both adults and kids, in there too. 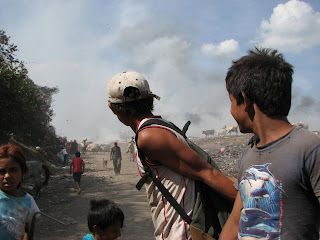 What we were about to see, almost made our eyes pop out of our heads! Within a few minutes, we were driving through a tip, but with views I had never experienced in my life! One of the girls in the ute told us, with absolute sincerity, that we should be careful here as there were robbers around and that tourists had been mugged here before, including recently! The tenacity in her voice and the tone and way in which she advised us, belied her young age. We looked around, and felt like we were in the middle of a scene from Mad Max! Burning trash, leaving such an acrid and pungent smell, that we both felt sick, and people, mostly children, scavenging through the rubbish and finding “treasures” like they had just won Wheel of Fortune! The 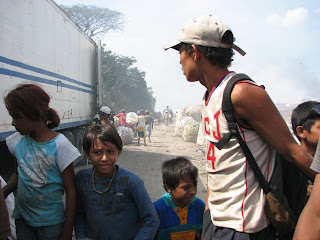 kids had tattered clothes, stringy hair, and dirt smeared faces! They looked up at us in the ute, like we were royalty, and to them, we probably appeared as if we were!

We saw one child, with some 8 packets of chinese noodles, and another collecting aluminium cans. We were also told that people often picked up and subsequently ate the meat from old and rotting carcasses, some even having died from this…..one man’s trash is another man’s treasure! I looked around, and saw a sea of doe-eyed children. Children who would never have either a hope nor a future. Children whose biggest struggle each day was trying to stay alive! 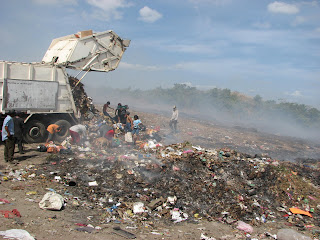 It was time to get out and go and visit the fort close by. The enegy was heavy! We have NEVER felt so unsafe, and besides we could not see two metres infront of us due to the smoke. Alex and I eyed each other off in a “There’s no way in hell, I am going up there alone” kind of way, and as spokesperson, I told the guys we did not want to go and check it out after all, and that we would go back down with them. They obviously sensed our fear, and drove an extra 100 metres up to show us themselves. 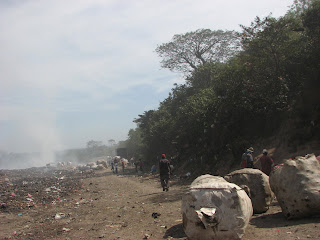 They were good guys, in the real sense of the word, and they showed us the fort. Yes, it did have an amazing view of Leon, but I was so totally freaked out, that I was not taking any of it in. Some of the waifs, hung around, but as I looked through their huge eyes, all I could see was desolation and a bottomless pit of nothing! I felt claustrophobic! I had to get out! And after the quickest tour ever, we were back on the ute once again, passing all those people and smoke and scenes from Mad Max! My mind was everywhere! The guys dropped us off somewhere close to town, and feeling safe but very unsettled, we both simply had to sit down and regroup. My mind was reeling! My heart was thumping!

I do beleive that it was our destiny to see this. This was not hearing about it, seeing pictures about it, or even viewing a documentary on it…………..this was live! A real, and pictographic insight as to how the other half live. These are the people who sadly do not even know that roses exist!

All these experiences and insights have been incredulous, and we are both so grateful to have been able to feel and breathe them. Just when you think you know it all…there is yet another corner to turn, and yet another lesson to learn!

“I have travelled far but my journey has just begun” – Andy Howse.

(Photos: 1.- Cathedral bell, Leon. 2.- Sandinista grafitti. 3.- View from El Fortin. 4.- Kids getting away after work. 5.- Young kids looking surprised to see us; with their reddened eyes from all the toxins from the burning rubbish. 6.- Rubbish truck dropping off the goods for “classification”; kids & adults looking for their next meal. 7. Rubbish is classified and then transported to recycling companies in Managua.)

Share
PrevPreviousCelebrating 2007 in Leon, Nicaragua.
NextWhat you have said about our journey and our blogs.Next