Nicaragua – you are now leaving your comfort zone! 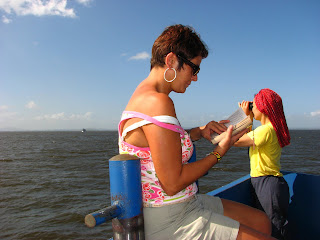 On the morning of the 26th, we made our way to the dock, where we would catch a ferry back to the mainland. Our next stop, heading north, would be Granada. Granada is known for being one of Central America´s most beautiful and well kept colonial cities, which indeed it is, especially with its colourful architecture. What we didn´t like as much was how touristy it was (say the rtourists!), and what we found was a downtown area full of foreigners and foreign investment. As usual, Alex and I find beauty in getting out amongst it all, and chatting to the locals. We met an older gentleman, Enrique, who invited us to sit on his porch, and chat. He imparted with us some amazing things about the culture and history of Nicargua. 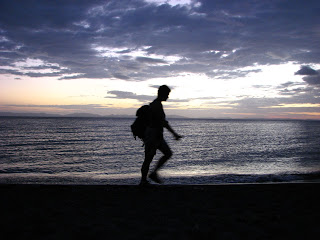 Travelling, in my opinion, is about learning, and getting out of your comfort zone, about meeting the locals and going to the markets to see how the people live and try the food that they eat, it´s about learning the language and trying to converse. It´s about experiencing new cultures. There is a lot to be learnt from ¨integration¨. All too often, we see travellers who make no attempt to learn the language, stick around the central few blocks or so, eat at places that have ¨recognisable ¨food (ie. what they eat at home, in an establishment that looks like something they´d find at home as well) and who basically want to find their home in a different country! Our challenge to them is to get out their and not only experience, but embrace the new culture! What does one travel for if she or he simply wants to find their own country somewhere else on earth? Take the Ombi and Alex challenge: leave your comfort zone, you will be amazed at what you will discover! 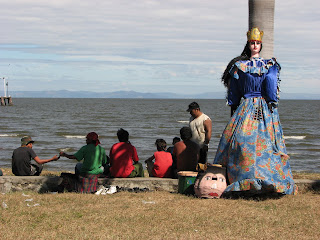 Whilst in Granada, we visited Las Isletas, a group of about 365 diminutive islands, scattered off the coast of Asese. They were formed some 10,000 years ago by an erupting Volcan Mombacho. Although the pictures looked impressive, our one hour boat ride revealed no such thing! Of course we only saw a small portion of the many islands, and we were horrified by the amount of construction going on, and by the many already established mansions on many of them. I felt like I was being taken on a tour of Beverley Hill´s rich and famous! The straw that broke the camel´s back, was the monstrous house with several big blow up dolls of Santa, snow and other Christmas objects. We later found out that it belonged to a Nicaraguan living in Miami. Alex and I want to know where we have gone wrong in society, and why so many people aspire to what has now become a commercial norm. When is this all going to stop! 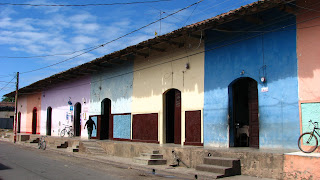 A few days in Granada was enough for us, as we wanted a more traditional option. We thus made our way to Masaya, which although only 20 minutes away from Granada, is far less commercial, and much more authentic. Although Masaya is known for its ¨artesanias¨ (handicrafts), I must say that it does not compare to places like Guatemala, Mexico or Ecuador. All the same, it was a great place to hang out in and submerge oneself in the local culture. 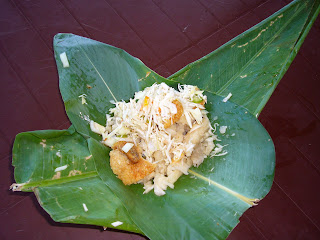 One of our first stops was the local market. Selling everything from fresh produce to cooked meals to clothes to shoes, we always find that markets are the epicentre of a community, and it is here that you can see how the locals interact and live. We stopped and had ourselves a meal of the local food: ¨gallo pinto¨(beans mixed with rice), ¨maduro¨ (deep fried plantain, which is a cooking banana), ¨tostones¨(squashed and deep fried plantain) and salad. Oh, and Alex had something meaty thrown in there as well. We both just love markets, and when there is one available we always try and eat there. Furthermore, the food is always cheap and almost always better than its more expensive counterparts, with measly portions (which have become the bastions for foreign travellers). As I said, get out amongst it, there is a whole other ¨real¨world to be explored out there!

The day after we arrived in Masaya, we visited a place called the Volcan Masaya National Park, which has the most easily acessible active volcanoes in the country. Only a short ride from Masaya, we suddenly found ourselves on the edge of the Santiago crater. Although we could not see the bubbling lava, which we were told existed, the volcano was certainly billowing smoke, and occasionaly we got a whiff of sulphur. On the pamphlet given to us upon entering the park, it stipulates that you should try and spend no more than 20 minutes up at the top, and that if rocks are emitted by the volcano, that you should hide under a car! I could not help but think that it was all a numbers game really! What are the odds that I…………………….or someone………or several people could be here when this actually happens? We beleive that when your time is up!

We then walked around the rim of an extinct volcano close by, and once again, were afforded breathtaking views: the lush vegetation within the crater, birds akin to the vulture family flying overhead, the imposing Lake Masaya in the immediate distance. I felt like I was alive and on the top of the world. 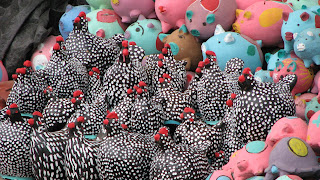 Whilst in Masaya, we also visited a centurty old fortress called Coyatepe. A decent one kilometre hike up a hill, the views of the surrounding area were, yet again, both spectacular and rewarding. As we walked back into town, we stopped by the roadside to buy a hunormous fresh papaya, for USD 50 cents, and also took the opportunity to chat to the guy who sold it to us. In the same area, were a couple of ladies weaving the hammocks for which the area is famous for. 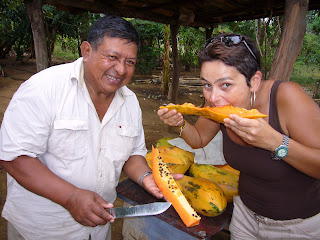 On the 30th we made our way to Leon, the place we would spend New Year in. 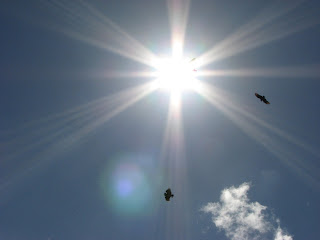 ¨From the early ages, there has always been someone before us, someone we have displaced, someone who has marginalised us, someone against whom we eventually mixed¨- Victor Hugo Acuna.

Happy reading, until the next installment.

(Photos: 1. On the way back to the mainland, Ometepe Island. 2. Sunset hike. 3. Folklore on Nicaragua Lake, Granada. 4. The colourful houses of Granada. 5. ¨Vigoron¨, one of national dishes of Nicaragua (cassava, pork and coleslaw, on banana leaves) 6. On the rim of the Santiago crater , Masaya National Park. 7. Traditional market, Masaya. 8. Getting into the guts of one good papaya! 9. View of the sky, as seen from Masaya National Park.)