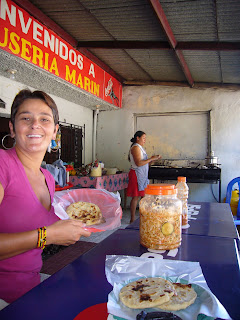 El Salvador, the least travelled Central American country. Do we need any other reason to go?

What our Central American guide book says about El Salvador: ” Travellers tend to skip over El Salvador……and because it´s still relatively unknown….travellers have the place virtually to themselves.” Key words scan……….travellers skip over, relatively unknown, virtually to themselves! Ombi and Alex, the adveture bandits, decided that this country was definitely going to be for them! Having the place to ourselves sounded particularly appealing!

The border crossing at El Poy was definitely our easiest border crossing yet. The fact that it is not a busy crossing probably helped too. We literally passed a booth, where we both showed our passports, got a polite nod, and were cordially welcomed to El Salvador. We couldn´t see the “Bienvenidos a El Salvador”( Wecome to El Salvador sign) sign either. Within seconds it all looked very town-like, and we asked where passport control was. The booth had been it! Welcome to El Salvador! 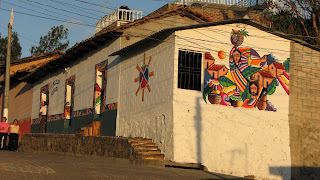 The first thing we noticed were all the “pupeserias”. Pupusas are El Salvador´s national dish and papuserias are the place where they sell them. They consist of two tortillas stuffed with either cheese, refried beans & cheese, or cheese/refried beans & pork. It always comes with shredded, pickled cabbage and carrot as well as chilli sauce. It was 1.00pm, and we were starving. We saw a place called El Marin, and stopped for a bite. We were not disappointed! They have been the best ones we have tried (we have been here for nearly two weeks at the time of writing) thus far!

Our first stop was La Palma, only a short ride away from the border. It´s a quaint little town, surrounded by mountains and greenery. We found a simple little place to stay in, called Casa Hotel, and as the name suggests, it was just like home. The owners were friendly, and as I hand washed my laundry on the top and open floor, I had sweeping views of all those mountains around us. La Palma is reknowned for its famous artist, Fernando Llort. Way back in 1972, he developed an art trend, which consists of painting simple but brightly coloured figures on anything from wooden crosses to wooden boxes. These images include children, religious figures and mountains and their villagers, just to name a few. These days, this art work has been extended to the facades of several shops and houses, making for an extremely pictographic view. Handicrafts with this artwork are abundant, and is the lifeline of some 75% of the locals.

We noticed almost immediately how friendly the people from El Salvador are, and it would not take us long to realise that this trend would follow us wherever we went. Indeed thay do have a reputation for being the friendliest folk in Central America, and I would agree without reservation. The country is beautiful, but the crown jewel is definitely its people! Coming here has been a world highlight! For a people´s person like me, it has been a bit like finding the Holy Grail! 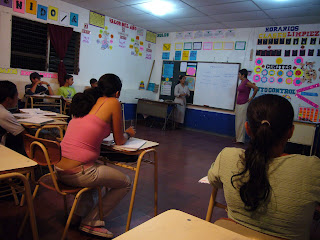 We had only been in the country for hours, when I met and started chatting to Don Francisco, the 70 something owner of a local shop. Jeans, cowboy shirt and hat to match, it only took him seconds to invite us into his shop, sit down and have a chat. Within minutes, we had met several of his nine children, who had popped in to say hello. One of them was Cristina, who is a school teacher, but who dabbles in many other things. Before we knew it, we were off walking with her to some night classes, where she teaches kids and adults that have had to drop out of school for a number of reasons, such as drug problems, not enough money and having fallen pregnant at an early age. She strongly beleives that the future of her country is in the education of its people! Well, hello! Are we on the same channel, or what! 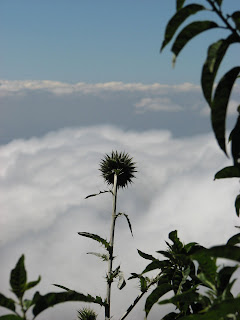 Alex and I both stood up and chatted about our respective countries, and I also had the opportunity to give them a bit of insight as to how education is respected in Australia, and that mostly people of all levels can study! (Despite the fact that our current government is doing its best to make this more difficult). I went on to give them my own view, as I tend to do, that the only way for the people of Central and South America to move on was to become educated! I congratulated each and every one on making the effort, despite their difficulties, in coming back to study. These people are their country´s future! Central and South America does NOT want to educate their poor, because poor means ignorant, and ignorant means power to those in charge! As I scanned the room, I saw a twinkle in a few eyes…..if only one person thinks about what I had to say, it will have been worth it.

We spent the next two days, walking around the beautiful village, as well as hiking up to El Pital, El Salvador´s highest point (2782 metres above sea level). Super friendly people chatted to us, and we got lifts without being asked. Near the top of El Pital, is a huge stone called La Piedra Rajada. It is said that it is actually a meteorite. Supposedly it was part of the big bang which caused the dinosaurs to disappear and the earth to change. It definitely looked pock-marked, and different to the surrounding rocks, and Alex and I were both totally overwhelmed by the energy. Actually, Alex felt the rock´s energy before we even saw it. He was spot on! 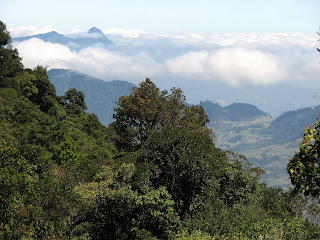 Whilst in La Palma, we met a lot of Cristina´s family, and were often invited for drinks, fruit and coffee. They have some beautiful little huts right in town, near the river called, “Piedra Del Bosque” (Rocks near the Forest). They are in a simple and comfortable setting, including hammocks under the trees in the shade, and are aimed at eco-tourism. If you go, look them up!

We knew that we could have spent more time here, but again, it was time to move on! We had made more friends in Cristina and her family, and we both wiped our eyes as we said goodbye. Universe willing, we will meet again!

Until the next posting. 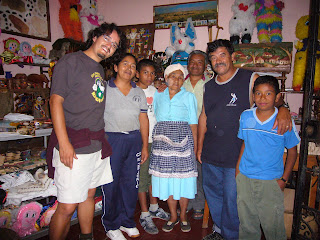 PS I would like to dedicate this blog to Jose, Cristina´s 9 year old son, and all the children of El Salvador. They have shown us how happy, cordial and well mannered children can be. They always greet you, saying both hello and goodbye, and it is never because their parents tell them to! It is a pleasure to see! May these children be an example to our own children!

Share
PrevPreviousMundo Maya; the mystical world of a lost civilisation.
NextSuchitoto…..that´s in El Salvador, not Japan.Next