El Salvador´s “Route of the Flowers” – a cultural affair.

The Flower route (or Ruta de las Flores) includes a small stretch of mountainous towns in the Salvadorean highlands, one of the first being Juayua. We found a great place to stay called El Mirador (www.hotelmiradorjuayua.com), run by a lovely local family, headed by the affable Jose, who was a pleasure to be around and always eager to help out. Special mention must go to Norma here, who did everything from cleaning our rooms to cooking in the hotel’s restaurant. We immediately struck up a friendship, and everytime we saw each other we would greet with a hug and kiss! 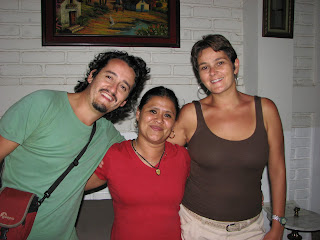 After settling in, we walked around to see what the town had to offer. We had heard all about this Gastronomic Food Fair, held every weekend, and for which Juayua is famous for. As the fair is held every weekend, we filled in our days with other activities, in anticipation of tantalizing our taste buds! Alex was particularly excited, as what coffee does for me, food in general does for Alex! 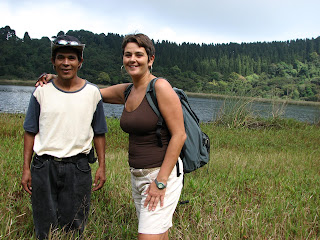 As El Salvador is still not geared towards mass tourism, there are still places that are best done with a guide, as they may be isolated and not 100 percent safe! Jose recommended Juan Pablo, a local guide, who turned out to be truly excellent; friendly, fun and knowledgeable.

On one of the days we did a hike out to Los Chorros, a beautiful waterfall, stretching some 30 metres horizontally, in a series of breathtaking cascades. Juan Pablo had asked us if we liked walking………..of course we did! With this he proceeded to take us through mountainous terrain, where we had to duck, and at times crawl through the scrub. We also found ourselves crossing a river at several points. The first few times I stepped on rocks and logs, and successfully avoided getting my feet wet. It reached a point, however, where Juan Pablo told us tha

t we simply had to walk through the water, as there was no other way! Once that was over and done with, the rest was easy………..feet wet, there was no longer any use or need to try and keep them dry!

Part of this walk included visiting La Majada, a coffee cooperative, where we were able to go inside and see all the workings of a coffee factory, from drying out the coffee beans, to the finished, roasted product! It was amazing to see, and the amount of work which goes into us getting that final cuppa is quite astounding! Speaking about that final cuppa……..the one we got in the cooperative coffee shop was awful! I know, I know…..although the coffee in South and Central America is amongst the best, there is no coffee culture! How I longed for a Joe´s Garage caffe late! (Joe´s Garage is a favourite haunt of mine, back in Brunswick St, Melbourne). Finally, after twelve kilometres or so of walking, we all caught a bus home. It had been a tiring but fun day! 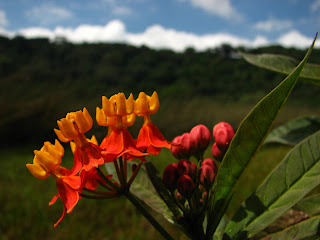 And then Saturday arrived! The weekend Gastronomic Fair was basically a whole lot of different, mainly local, restaurants set up in tents around the plaza selling food. Again, lots of options for carnivores, but a struggle for us vegetarians! I found a few interesting things though, and the sweets were great! People come from all over for this fair, especially from the capital. It’s quite an interesting atmosphere, and a great place to people watch. As well as food, there are stalls selling everything from batteries to t -shirts. As I looked around, however, I could not help but think that whilst so many had the money to purchase whatever food they desired, there were others, including children and the elderly, selling whatever they could to make the money to buy their next meal! I often wonder why some of us have so much, whilst others have so little! 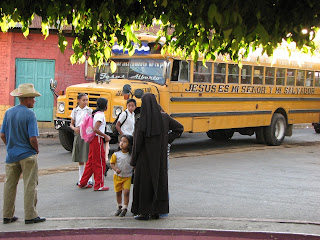 There was also a band playing in the plaza called Grupo Andino Xiuh- Coatl (which means fire serpent) in one of the indigenous languages. As the name suggests, they play music from the Andes, in South America. The group members were particularly talented, with many of them playing a variety of instruments. The sounds of the mystical pan pipes always leave a lump in my throat, as well as make me feel very nostalgic! It is no secret that the Andes are my favourite spot on earth!

On Sunday, we hiked to two lagoons, The Green Lagoon and the Lagoon of the Nymphs. That day we walked some 18 kilometres, with Juan Pablo pointing out some things that we certainly would not have picked out for ourselves. This included fruits and medicinal plants, which we even tried! This walk, although longer than the other, was not as difficult, and was both soothing and relaxing. As we made our way through small villages we saw the way in which the locals lived, and simply took in the culture. Apart from the people, the best part about El Salvador for us has been how few tourists there are. To be totally honest (as well as a little selfish!), we have loved having the country to ourselves!

We were totally loving El Salvador, but only a few days shy of having been away for six months, we knew that it was time to move on! As we left, and Norma gave me my final hug and kiss, she told me that she was going to miss me! And I sincerely told her that I was going to miss her too! This, for me, is both the best as well as the hardest part of travelling!

Goodbye El Salvador! We love you and we are going to miss you! Guatemala, here we come!

“You, yourself, as much as anybody in the entire universe, deserve your love and affection” – Buddha.
(A Valentine Day’s wish sent by Michelle Miller, a fellow traveller we met in Honduras…….both she as well as the Buddha got it right!)