The energy of Guatemala’s sacred places. 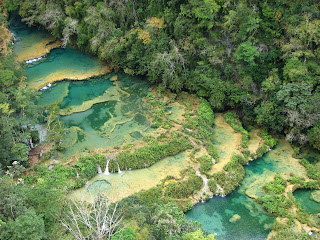 It was raining when we arrived in Coban, and cold to boot! Actually, very cold! I was not really expecting this! Guatemala is “supposed” to be hot. Although “heat” is part of its Central American image, it can actually be quite cold in the highlands.

After an hour or so of trudging in the rain, large backpack on our backs, smaller one in front, another bag full of food, and umbrellas in hand, we finally found a place to stay. We were both a little tired and over it today! Casa Luna was run by Selvin and Edin, a jovial couple who were always quick to please and help out. I liked the feeling of the place, and quite frankly, I liked them! It also felt very secure! And yes, it was clean!

We had really only come here to do the day trip out to Semuc Champey, a series of spectacular, cascading clear waterfalls. How do I describe the colour? In this instance, Alex´s photos actually do do the colour justice! Please check out this link, http://semucchampey.tripod.com/ I agree with the person who took these photos, that whilst spectacular, it still does not do the site justice. For Alex and I, the highlight was descending down the last and longest waterfall, via a wooden ladder wrapped around a rock, and entering a cave behind the fall, and from which you could see the underground stream ripping through, out into the river in front. What an amazing place, with amazing energy! To sit amongst the stalagmites and stalagtites, and watch the roaring water push through alongside the waterfall was superb. Unfortunately, you will have to close your eyes and immagine this, as Alex’s camera is not waterproof! This part of our journey certainly, however, left an impression on our hearts! 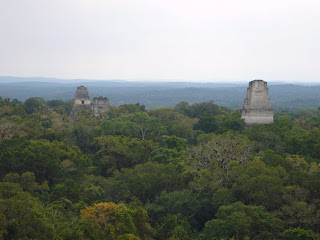 Our final destination in Guatemala would be, last but not least, the famous Mayan ruins of Tikal, way up north in the province of Peten, close to the Mexican border. Up in this neck of the woods, we revert back to a hot and humid tropical climate. Most people stay in either Flores or Santa Elena, which is some 64 kilometres south of the ruins. This is where I had stayed eight years earlier, but I had also heard that these days it was simply a place full of people who really only wanted to go to Tikal.

El Remate, on the other hand, approximately 30 kilometres south of Tikal, was the much smaller and more tranquil option. Despite its lack of markets and restaurants, I must say, it was a great choice! We ended up at a place called Hostal Hermano Pedro, run by the easy going Arturo. A basic, but comfortable two-storey wooden structure, with hammocks swinging in the breeze and a kitchen, we felt it was a great catch!( www.hhpedro.com) I repeat, it’s always good to cook up a meal that is exclusive of rice and beans! (those staples that, despite frequent consumption, we have come to love!)

We ended up doing a 5 hour guided trip of Tikal with a local guide called Pablo. Whilst neither of us are really into tours, this was well worth it. He had been recommended to us by a Canadian couple staying in the hotel. Tikal not only covers a large area, but it was totally built in the jungle, which adds to the whole Mayan mystery. How did they do it? With so many structures and so much area to cover, Pablo was able to impart information that we otherwise would have had no way of knowing. Pablo, I do not know how you did it, but you were interesting, fun, entertaining and informative, and you took us through with the enthusiasm of a first timer! You can contact Pablo on miradordelduende@gmail.com.

What can I say about Tikal? Second time for me, first time for Alex. Like Macchu Picchu, the excitement of seeing it more than once never diminishes! The famed view over the jungle canopy, as seen atop Temple 4, is as good, if not truly better, than they say it is! Let me try and describe it: From this vantage point, all one can see is thick and dense jungle, with only the tops of a few pyramids and temples jutting out! Again, one can only wonder how the Mayans did this. Or…..did the Mayans do this? It is also said that it is one of the most spiritually powerful spots on earth, which I would also have to agree with! (http://www.enjoyguatemala.com/ruins.htm) There is so much more that I could write about Tikal, but none of it would do it justice. It is a place that is much more about the feel, the energy, and how it affects your soul. I was thankful to be back, and we both felt blessed to be able to experience its energy (in my case, once again)! And it is with this energy that our Guatemalan sojourn neared its end. The border crossing at Melchor de Mencos was only an hour away, and the very next day we found ourselves in Belize!

“Every day you may make progress. Every step may be fruitful. Yet there will stretch out before you an ever-lengthening, ever-ascending, ever-improving path. You know you will never get to the end of the journey. But this, so far from discouraging, only adds to the joy and glory of the climb.” – Sir Winston Churchill (1874 – 1965)