Finally, off the beaten track in Guatemala. 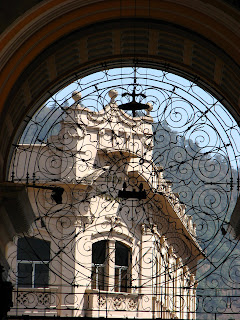 Although we were having a brilliant time in Guatemala, Alex and I both decided that we could not leave until we had seen a part of the country that was not so frequented by tourists. Chela is not one of these places, but our opportunity would soon come along!

After the usual jumping on and off several chicken buses and sharing our oxygen supply with (very!) bad exhaust and diesel fumes, we made it to Chela, but not as early as we would have liked to. The bad part about rocking up late in a biggish city is trying to look for a place to stay. Looking for a place in the dark, whilst trying to watch for potential dangers are kind of mutually exclusive. This is where our guide book does kind of convert itself into a bible, and the word becomes gospel! The desire to find a place to rest my weary head safely, when it’s dark, only just supercedes my desire to find a clean place to rest it! 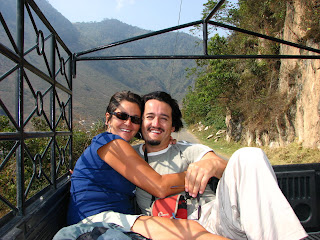 So, we stayed in Casa Argentina….but just for a night! Yes, it gets rave reviews in Lonely Planet, and the mother and daughter team are indeed very kind and hospitable, but ladies…….get it together and do some cleaning! Fumigating the beds wouldn’t be a bad idea either! Not happy about those bed bug bites! This is where Alex and I took out our silk liner. When in doubt, whip it out, I say! Let me explain, our light and small, sewn up the side silk liners, are fantastic, take up only a tiny amount of space, and almost excite me, when I know the sheets aren’t up to “Ombi standard!”. Yes, I have been accused of being The Queen of Clean and/ or the Clean Police! The shared bathroom did not cut it either! I am afraid that I do not do hairy shower plugs! The communal kitchen? Good in theory, but in practice, it looked like a breeding ground for the infectious diseases club! 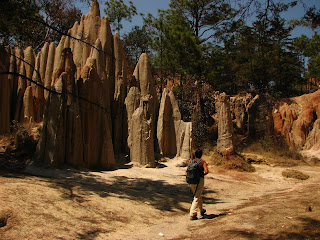 I have learnt that bitching gets you nowhere, however, so I set my alarm for 6.00am the next day, and explained to Ricardo and Alex that it was my intention to get up early and look for a clean place to stay. That I did! The next morning, in a matter of no time, I found a place called Hotel Horiani. A very small place with only six rooms, it was run by a Mayan woman and her family. I went back, told the guys, and we moved across.

Chela is the gateway to the northern highlands, and there are a number of different places to see and visit. It is yet another place where the locals dress in their traditional clothes, which changes within each little village. Whist Chela has quite an impressive downtown area with colonial architecture, there is not much else in the physical town to see and do. 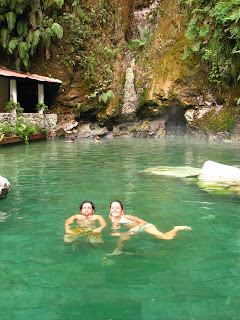 A great day trip was to the Fuentes Georginas, or the Georginas hot springs. To get there, we first had to take the short bus ride to Zunil, a town just out of Chela. Ah, finally no tourists! And we were able to see how the locals went along with their own business, buying and selling fruit, weaving and just going along with their daily happenings. From here we had to take a pick up the 8 kilometres or so up the mountain to Fuentes Georginas. What can I say? A couple of very hot and relaxing pools in the fresh mountain air! I sat in them probably way too long, and ended up looking like a wrinkled prune, but I felt soooooooooooooooooo good!

Another day was spent visiting other local highland villages, such as Momostenango, San Francisco el Alto and San Andres Xecul. We were definitely the objects of the town’s curiosity in Momo, and the market was quite exciting to visit, as we were able to se

e how things were done without the masses! It is here that I bought a highly colourful weaving, which I hope to use as a picnic rug back at home! We arrived in San Francisco at the tail- end of their market day, but noticed that the goods were mainly “modern” clothes and cloth from China!

Finally San Andres Xecul. This town’s only real highlight is the facade of its central church. It is painted in a yellow-ochre colour, but oddly, all over it are coloured sculptures of animals, Mayan symbols and people. For a Catholic church, it looks quite bizarre, yet it is only another example of how the locals blended their own religion with that which was forced upon them.

We so wanted to go to Todos Santos, several hours north of Chela, but time seemed to be running out. Having said that, the “lucrative offer” of a place completely off the tourist track, was so enticing! And, so we went. Firstly we had to make the four hour trip to Huehuetenango (Huehue), and then a further three hours onto our final destination. Farther up into the highlands the topography and geography was breathtaking, and also considerably colder! Those heavier pants and thermal top which had been pushed to the bottom of the backpack for so long, lovingly made their debut! The beauty of this place was …..simply being here! No put-ons or shows….it just was! This is a place where even the men wear traditional clothes, albeit some with interesting variations, a result of western influence and/or life overseas. The men basically wear red and white striped pants, so immagine our surprise at the younger generation’s version of “flared” red pants, diamond studs and black stockings on their heads! Too much MTV? 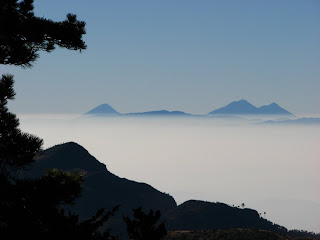 We did a breathtaking 5 hour return trip walk to a place called La Torre (the tower). Surprise, surprise, guess what we found on top? Seriously, the walk was beautiful and once up top, we were able to see several of Guatemala’s volcanoes. We took a different route on the way down, and although it provided us with another, and completely different set of views, it was very dry. I tried my hardest, but at one point went down and hit my head on a rock. A lump emerged immediately, but Alex cured me with another of his Ecuadorian home remedies. He made me take in a breath, and he pushed on it so hard that I cried! Having said that, no lump and no more pain! 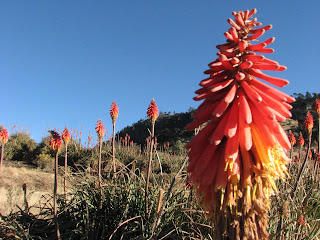 It was also in Todos Santos that we experienced a Mayan sauna, or “tuj”. We met a lovely lady called Rosa, who for a small fee alowed us to use her sauna. It was a little concrete hut outside her house, heated by firewood, with barely enough room to seat two people. It was so relaxing, and she even “cleansed us” with some special herbs. Rosa was fascinating to chat to, as she had also lived several years in both Mexico and the USA. Coming back to “village life” had been difficult for her, but it was her home! At the end of the day, people only ever move in search of a better life, so before you go knocking refugees, migrants and asylum seekers…….ask yourself this: Would they be doing this if they were not searching for a better life? 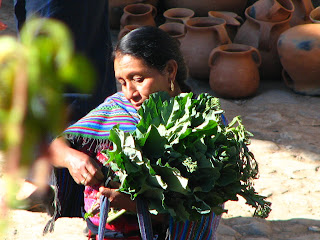 We also happened to be in Todos Santos on market day, which was quite a sight. I had not seen that many pairs of red pants in my life!

Once upon a time, in order to get to Coban and Semuc Champey, in the country’s east, we would either have had to have gone back to the capital, and then made our way back up, or endured a spine breaking bus ride east from Huehue, which could have taken days. Times have changed! We took the 6.ooam bus from Todos Santos to Huehue and then headed out east and made it to Coban in a day. Again the views were breathtaking, as we spent hours traversing undulating hills, with spectacular valleys. Looking out of the window was often scary, as the drop was quite a long way down!

Having said that, we did make it to Coban in a day, although we were exceptionally tired!

(Photos: 1.- Colonial art work, Xela. 2.- Riding in the back of a pick up to Georginas Hot Springs. 3.- Momostenango rock formations. 4.- Ombi & Ricardo in the waters of Georginas hot springs. 5.- Palm Sunday celebrations, Momostenango. 6.- On the way to Todos Santos, on the most colourful chicken bus ever!. 7.- At the top of La Torre, view of the southern cordillera , Avenue of Volcanoes. 8.- Beautiful flower on the trail to La Torre. 9.- Market day at Todos Santos. 10.- Looking around; locals in Todos Santos. )