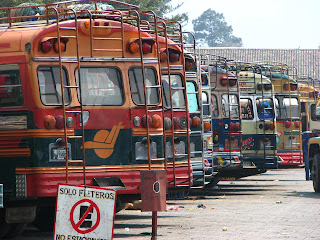 The last time I had been in Guatemala was in 1999, and although I certainly had fond memories, I was worried about how often I kept hearing about how touristy it had now become. I hoped that this would not be the case, but alack and alas, it was! As we all know, there are both highs and lows that come with increased tourism, and even more so when it comes to tourism en masse!

The border crossing was fluid, and we soon found ourselves on a bus heading for the capital, Guatemala City. This was the first ¨non – chicken bus¨ we had used in a while, but it was coming through from San Salvador, and happened to be there just as we were crossing the border. We paid a little m

ore and got to the capital a little faster, but I must say, having been there before, it is not a favourite place of mine. It is, however, the pivotal point for several Guatemalan destinations. It was exactly as I remembered it: big, sprawling, busy, chaotic and polluted! No sooner had we hopped off the bus, than we caught a taxi to another terminal across town, from where we would catch another (chicken bus!) to Antigua Guatemala. We
probably paid too much for the short taxi ride (part of the tourism on masse ¨lows”) to the connecting bus station, but we were certainly able to exit the capital in speedy fashion! 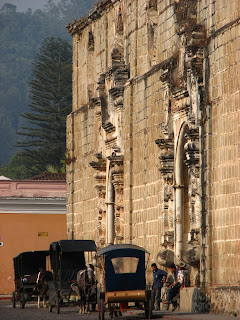 Our first real Guatemalan destination only took us a little over 45 minutesto get to from the capital. It too was exactly as I remembered it, just with a lot more tourists! Antigua was once Guatemala´s capital, and although now overflowing with tourists, nobody can take its beauty away from it! With its cobbled streets and colonial houses in earthy hues such as mustard and ochre, it is visually beautiful. Its backdrop is the three very visible volcanoes. Did somebody paint this? It´s really on of those ¨postcard¨type destinations.

And the people! The Guatemalans, especially the women, are renowned for their colourful clothes and headdresses, which vary not only from region to region, but from village to village. This typical dress can be seen everywhere, and it is used in their day to day living! What an explosion of colour and culture! It is estimated that some 50 to 60% of Guatemalans are of indigenous extraction, with the majority being Mayan. This indeed lends itself to a country which is full of culture, on many levels, and the reason for which it is visited by so many. The cultural aspect is indeed fascinating. It is undoubtedly the most cultural we have visited to date on this trip. But there are so many layers….and as you peel each layer off, it becomes even more mesmerising. The country has a way of weaving its magic and drawing you into its spell! 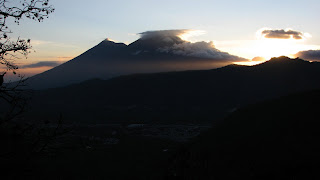 We spent a few days here, and a highlight was without a doubt, climbing Volcan Pacaya. At a height of 2552 metres, it is the only active volcano near Antigua. As I have mentioned before, there are some things you just cannot do yourself, and this was one of them. The walk was only about two hours return, but we had to drive a couple of hours to get there……and we were fortunate enough to have our chicken bus (bless its old and weary little soul!) break down! So, our band of some 20 gringos had no other option but to wait by the roadside, until another chicken bus came to pick us up! You will realise that most backpackers have a love-hate relationship with these ¨people (and whatever else) movers¨. There is another option – the more expensive and comfortable mini-vans which only gringos use…….but being on a bus with the locals, their animals and their produce, in my opinion, is all part of the journey! 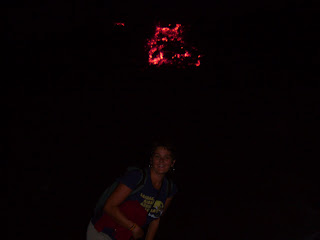 The volcano, ah yes, was incredible! I mean, we got so close to the lava that it was almost offensive! Let me not lie, however, Ombi the adrenalin junkie, got as close as she could, and got a bit of a buzz, I might add. I cannot explain what the feeling of being that close to flowing lava was like! Just look at the picture! In any first world country it would have been so illegal, but that was part of the attraction! Let me explain “close”- 20 to 30 metres away! Some of you would say crazy or insane, I would say thrilling! But put your woes aside, we did it, and thoroughly enjoyed it! 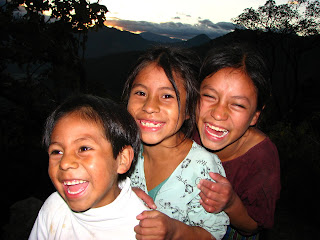 We stayed a few nights in Antigua, the last two being at the Black Cat Hostel (http://www.blackcatantigua.com/). This was a fun place, with a fun crowd (read……always ready to party!), and included an amazing breakfast! Yeah, someone got it right, big and good breakfasts are a backpacker´s dream come true! They keep us going for the whole day! The staff were great to, from Amelia to Andrea as well as Adrienne, one of the volunteers. Everyone was super helpful and nothing seemed to be a problem.

On the last day that we were there, the hostel had a big ¨clean up¨day, where everything was fumigated! No, that did not include us, thankfully! On a serious note, I would firstly like to congratulate The Black Cat and then highly recommend them for doing this, as it keeps the place clean and the bedbugs away! Yes, unfortunately, some places DO have them! Secondly, as nobody was able to enter the hostel until 7pm, they also organised, for those of us that were interested, to spend a day at a place called Earth Lodge (http://www.earthlodgeguatemala.com ), about a half hour´s ride away. Nestled in the hills of Antigua and run by the congenial Briana and Drew, it is a gorgeous getaway, be it for a day or a few nights. Please take the time to look at the website, I promise you that the photo that pops up is EXACTLY what it looks like! Um, what else, the food is fresh, healthy, and tasty! Need any more reasons to go? 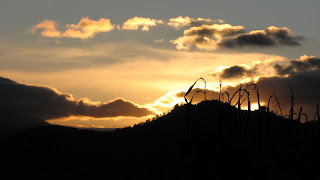 The next day we bundled up, and made our way to Chichicastenango, famous for its huge and bustling weekend market. We left to go there on the Saturday, as we wanted to be all ready for the action on Sunday!