I had also been to Lake Atitlan when I was in Guatemala last, but had only spent a few days here. This time, we stayed for almost a week, and really took the time to explore the various villages, all the way around it. We started off with Panajachel (Pana), which despite being known as “Gringotenango” (Foreigner-land!), has some breathtaking views of the lake. It is considered to be one of the most spectacular places in Central America, and a quick walk to the lake´s edge helps to confirm why. Lago de Atitlan, or Lake Atitlan, is a collapsed volcanic cone, surrounded by a multitude of volcanoes, and is really one of those postcard type places. As you look out onto the lake, there truly is this mystical wave that seems to sweep over you! And you definitely do feel like you are looking at a postcard! 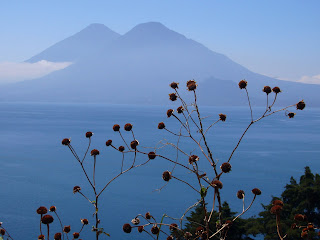 Back to the highs and lows of tourism. Alex and I had a bit of a culture shock when we first entered Guatemala, as we had not seen this many tourists in a long time. Along with Antigua, Panajachel is one of the most touristy places in both Guatemala and Central America. Amongst the problems we encountered were people asking a ridiculously high price for their handicrafts, food prices (particularly in restaurants) being totally disproportionate (ie. overpriced for the quality and quantity!), and just flat out getting ripped off, especially with boat rides to various parts of the lake!

I was so incensed one day at having been, albeit slightly, overcharged on a boat, that I went to the tourist office, and expressed my disgust. I had reached saturation point, and was sick of being seen as ¨the gringa with a money tree in her backpack¨! The guy behind the desk actually had some very helpful and interesting information to impart. Do not give beggars and especially children money! They then become accustomed to getting things for free, as well as breeding people who feel that foreigners both owe them something and are rich! And when I thought about it, he was absolutely right! I rarely give money, but Alex and I have often bought food, especially for hungry children. When I stopped to think about it, this was the first time that we had encountered such a problem, and when one thinks about the amount of tourism here, and how many tourists are potentially giving the locals money, it all made sense! So, please be a responsible traveller, and give food and not money! It is the only way we can try and illicit some type of positive change! 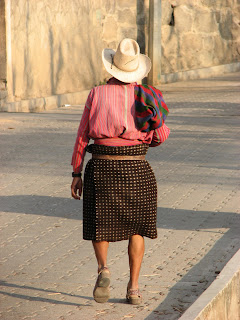 Apart from that little interlude, we found the lake fascinating. The day after we arrived, we walked to the villages of Santa Catarina Palopo and San Antonio Palopo. Between the two, it was a 10 kilometre mostly winding and uphill walk, but the views continued to be impressive! (May I add that there really was no average view of the lake, with one vantage point simply being more spectacular than the next!) So close to Pana, yet we were the only foreigners in sight. I should add that in the highlands, the first language of the people is one of the many Mayan dialects, with Spanish (and only sometimes!) being a second. It is fascinating to see how even a 4 kilometre distance between villages, means a totally different colour or style of traditional dress!

As we approached San Antonio Palopo, we noticed a child of maybe 10 years old or so, sitting by the side of the road. His face and arms were streaked with dirt and charcoal, and he had a log (not a small one, but one that was quite disproportiona 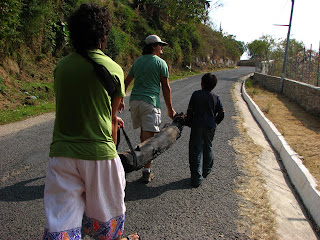 te to his size!) tied around his waist by a thick rope. As if that was not distressing enough, he looked so sad! We stopped and tried chatting to him, but soon figured that Spanish was not his first language! We managed to work out that he was making his way back into town…..dragging the log by himself! In a community effort bid, I carried Ricardo and Alex´s backpacks, and they helped the child, who managed to tell us that his name was Jose, carry the log into town, perhaps another one or two kilometres on. As the boys walked up ahead, tears welled up in my eyes (something that has happened often to me on this trip). I struggled with the injustice of this world, and in particular, of this situation! 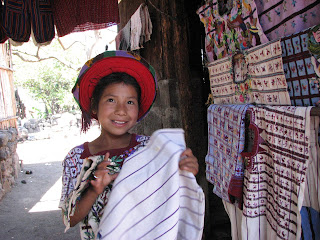 As we walked into town, the focus was definitely on the three gringos! People stared at us with an interested fascination! We walked the child up to his house, and when his mother came out, she clapped her hands together, looked up to the sky and thanked us! It was in a Mayan dialect, but we all clearly understood the language of the heart! She was so grateful, so very grateful! I went and bought the child a soft drink, and when I gave it to him, his mother (Maria, she told us) was close to crying, and thanked us again! I will never forget the looks in both of their eyes, and no amount of thanking us could ever have expressed their innermost sentiments! I walked away with a lump in my throat, and as I write this I once again have both that same lump as well as tears in my eyes!

We also spent some time in various other villages around the lake. A day trip to Santiago de Atitlan also proved fascinating. Yet another lake side village, with yet another set of traditional clothing, we found the highlight to be the shrine of “Maximon”. The effigy resides with a different family each year, and the usual way of finding “him” is to ask a few questions, and be escorted, usually by a local child. This local deity, who is a combination of a variety of Mayan gods and Catholic saints (the result of the Spanish conquistadors having force them to change their religion!) is highly revered. 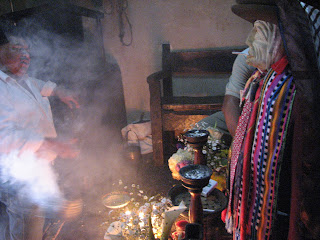 San Pedro de Atitlan, although quite beautiful, was a little too “grunge and ganja” for Alex and I. We say, keep your drugs away and do not infect others with your lifestyle, if that is what you choose! It is all part of responsible tourism, as the use of drugs,without a doubt effects the locals!

Santa Cruz la Laguna was a beautiful spot, made all the nicer by the wonderful lake side place we stayed in, called La Iguana Perdida. (www.laiguanaperdida.com) Run and owned by Dave and Deedle, it was a truly relaxing get away. If hammocks swinging in the breeze, overlooking the lake are not enough to entice you, the amazing menu and food should! For 45 quetzales (under USD $6.00), a huge dinner is served up each night. Vegetarian options abound and you can go back for seconds! In beans, rice and tortilla land, that is certainly a luxury that most of us can afford! Apart from eating (well!) and lazing around, we also did a magnificent 3 hour walk to San Marcos la Laguna. More breathtaking views and postcard pictures! 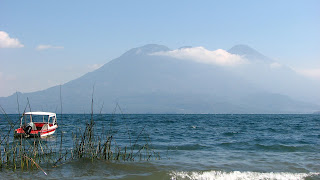 Our last night on the lake was spent at San Marcos la Laguna, which is the lake side town known for its spritual vibe, and whilst relaxing, we knew that our lakeside adventure was coming to an end.

The next morning we got up early, caught the ferry back to Pana and, along with Ricardo, caught a bus towards Quetzaltenango (known as Xela, or Chela for short), our next destination.

Next: Further up in the Guatemalan highlands!