The spool comes to a dizzying end! Cuba

Santiago de Cuba provided us with more dazzling culture, and amazing people, both foreigners and Cubans. Alex and I have been astounded by the amount of Cubans who have really opened up and shared their ideas with us. Knowing our stance on the situation, they have spoken out with honesty and voracity. It is at this point that I would like to say that I do not feel that I have done a ¨complete¨ job in telling it all. As I mentioned in my first blog on Cuba, there are so many layers to the country, and trying to capture the true essence in only a few blogs is like trying to do an overnight course in learning to speak fluent Arabic! It ain´t gonna happen!

In Baracoa, we had met a Spanish couple called Juan and Maria. As we were strolling through the streets of Santiago, we bumped into them, and they invited us into the house of some Cuban friends they were staying with. What a wonderful family! In no time at all, they were making an offering us snacks and drinks, and we stayed for hours. I quickly forged a bond with Liana, who was pregnant with her first child. She was such a beautiful person, both inside and out. I promised that I would come back and visit the next day. A promise is a promise, and I try never to break them! 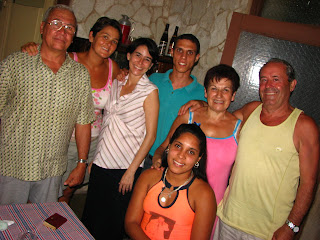 That night, along with Maria, Juan and Sergio (Liana´s uncle), we went to the ¨Patio Los Dos Abuelos¨ (The patio of the two grandfathers), a small and intimate space where we listened to a band strum and tap out their stuff. I want to say that they were ¨amateur¨, but thus far, when it comes to talent in the music and dance field here, all we have seen is supreme professionalism. 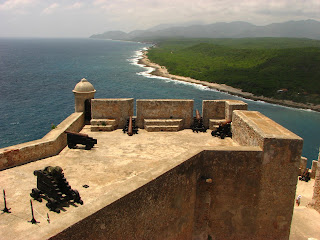 Whilst in Santiago, we also visited the Carnaval Museum, which took us through the history of carnival, costumes used and instruments played. We were also afforded a performance by a group of dancers. The performance, as you can rightly assume, was exceptional! We also visited the Fortress of San Pedro Del Morro, some 10 kilometres out of town. The ¨only¨way to get there is via taxi, which costs around 6 CUCs (about USD $6.00), but we defied the odds yet again. A combination of a local truck and leg power (read: walk a couple of kilometres!) got us there and back on USD 8 cents. Who said that it couldn´t be done! Yet another UNESCO World Heritage site, of which there are many in Cuba, the fortress sits imposingly upon a 60-metre high promontory. Apart from being considered the best preserved 17th century Spanish military complex in the Caribbean, the views are breathtaking.

With now having spent almost 2 and a half weeks in Cuba, we were almost totally over the 20 cent pizzas and cucumber, tomato and capsicum salads ( that we were making from the meagre produce we were able to buy from the fruit and vegetable markets). We were steadfast in our resolve to not eat in state-run restaurants, but were also so very bored by the lack of variety! And then we caught ourselves in the mid-bitching act, stuck our heads back in, and reminded ourselves that, in reality, we had nothing to bitch about. I closed my eyes and longed for Teresa´s food back in Havana. Only a few days to go! 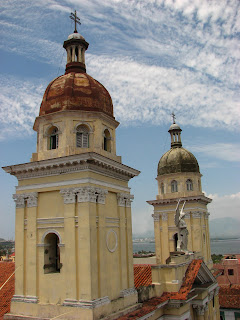 I went back the next day, and visited Liana, as promised, and along with her husband, Fernando, and aunt, Ilda, we had another relaxing evening. We were once again bestowed with drinks and snacks, and also, yet again, I was amazed and astounded by the Cubans´ generosity in the face of such adversity. The next day, I bumped into Liana in a plaza in central Santiago de Cuba. The night before I had been telling her that I wanted my hair trimmed, and she had recommended her hairdresser. It just so happened that her hairdresser was only half a block away. Not only did she take me there, and wait whilst I had my hair trimmed, but she paid for it as well! Although it only cost 3 pesos of their national money (about USD 15 cents) I was totally blown away by her selfless and genuine gesture. (The fact that I tipped the hairdresser is totally irrelevant!) I do not think that Liana will ever understand how that touched my heart! And indeed, so many Cubans have touched my heart in so many different, yet memorable ways.

It was finally time to go back to Havana, where we would spend our last weekend, before flying back to Cancun on Monday. Our last days were pleasant and relaxing. Although we once again walked along the Malecon (beachfront), wandered through Old Havana, and had a few more 5 peso pizzas and one peso ice creams, we mainly just relaxed at home with Ondina and the family. Although it had only been a short period of time, Alex and I had grown particularly fond of Ondina, and I knew that saying goodbye would not be easy! This woman was an inspiration to both of us! I really just wanted to pack her in my suitcase and take her home with me!

The night before we left, Alex and I emptied our backpacks and left anything which we knew would be useful: things such as toothpaste, antibiotic ointment, tiger balm ointment, soap, shampoo, conditioner, cotton buds, olive oil and vinegar. Many of these products are either really costly, or non-existent in Cuba. For Alex and I, it is about giving as well as receiving! Remember that you cannot receive if you are not willing to give, and vice versa.

Alex and I woke up early on a Monday morning, and said goodbye to Teresa, Pucho, Diana and Dionis. Teresa came back soon afterwards, and our final hugs and goodbyes were to her and Ondina. Of course, we cried as we said goodbye, and as I hugged Ondina one last time, I promised her that although I did not know when that we would return one day! Remember what I said about promises!

A taxi had come to pick us up and take us to the airport. My head reeled the entire half an hour it took us to get there. The events of the last 3 weeks were spinning around in the now very congested space between my ears (the memory was on overload!), as I tried to grasp onto what I had seen, heard, experienced, felt and lived! It was without a doubt overwhelming, and I was having trouble processing it all. Rarely do I put things in the too hard basket! Congratulations Cuba, you are one of the very few active participants in that basket for me!

We boarded safely, and as the plane took off, I took a deep sigh and said goodbye to Mars!

NOTE: Although an exceptionally confrontational book, with rather crude and blunt references, I am in the middle of reading a book by (a now dead) gay Cuban exiled writer called Reinaldo Arenas. It is titled, “Before Night Falls”. If you want to enter the real world of Cuba, as seen through the eyes of a Cuban, it’s rather enlightening! Thanks, Sam (my new “pommie” friend I met in Mexico) for giving me the book.