The ¨Americas¨ sojourn comes to an end. 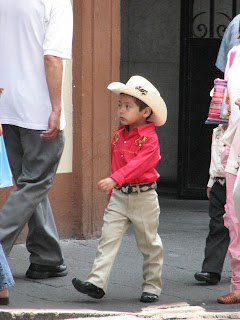 Again, both Puebla and Taxco were places that I had visited on my last Mexican trip, but I remembered both fondly, and embraced the opportunity to be able to “show” Alex. The beauty of this world trip has been both experiencing new places with Alex, as well as revisiting places that I have already visited, also with Alex! I must say, the sharing has been phenomenal! The experiencing of new things together has been amazing, but going back to places already visited and being able to share them with my soul mate has also been a unique as well as an extraordinary experience.

Puebla is very close to Mexico City, and the largest place we had been to in ages. It is also renowned for its superb food. As it is quite large, it did not seem as intimate as the places we had been to in recent months, but again, if you take the time to walk, probe and explore, the little treasures that can be found are astonishing. Puebla has many colonial pockets, which can again be seen in its various buildings and edifices, many of which are adorned with the ¨azulejos¨(painted ceramic tiles), for which the city is justly famous. We only spent a couple of days here, but as usual, we wandered around, visited markets, and chatted to the locals. 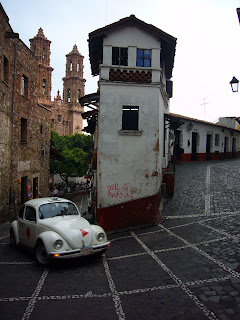 Taxco, or Silver City, was next. I had forgotten how beautiful this little silver mining town really was! Clinging to a steep hillside, its extremely narrow cobblestoned streets twist and turn when you least expect them to, revealing awe-inspiring views at almost every turn. Rather than ¨Oh no, not another colonial city¨, Taxco was literally, a breath of fresh air! Unlike many other colonial Mexican towns, it has not become swallowed up and surrounded by industrial estates. What this means is a view that is truly postcard-esque!

Taxco is reknowned for its silver mines and subsequently its many shops selling quality silver jewellery, both wholesale and retail. It was very easy to wander the winding roads and alleys and pop into several of the plethora of silver shops in town. Subsequently easy, was buying a few
choice pieces. I did not have the advantage of buying wholesale this time, and although considerably more expensive than Asian silver, the quality is far superior. Did I become really excited over all the silver jewellery after 5 years of having had a business selling it? No, not really! Alex and I had some real reflection time here! We had a great 5 years in the jewellery business, but neither of us would consider doing something similar again! That was then, this is now! 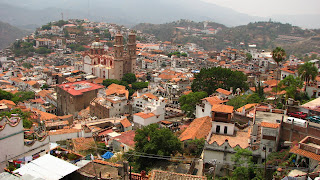 Perched up on a hill, on one of the highest points in Taxco, is a Rio de Janeiro-like statue of Christ. The walk up took about an hour, and although steep in places, it was well worth it. What can I say about the views? Just when you think it can´t get any better, it does!

Last, but certainly not least, Mexico City…….that huge sprawling metropolis which is home to some 18 million Mexicans! Consider that it is almost the entire Australian (20 million) poulation! As we entered the outskirts, and the traffic picked up, as well as an the insane amount of cars, we tried to conceptualise its enormity. 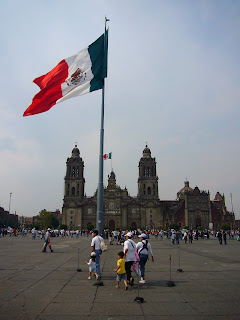 Once we arrived at the southern bus terminal, we made our way to my friend Claudia´s house, in San Angel, a picturesque and safe part of town. I met Claudia on my last trip to Mexico in 1999, and we have stayed in touch ever since. That first night the three of us stayed up into the early hours of the morning, chatting about a multitude of things. It´s always lovely to be able to intoduce Alex to the friends I have met whilst travelling.

The next day, along with Claudia, we went into the city centre and did some of the touristy things, like visiting the huge Zocalo (or central square), and various markets, including the quirky Mercado de Sonora, which supposedly has all the ingredients for Mexican spells and healing. All things esoteric are up for grabs here, from potions on how to find your true love to a ¨limpia¨, or spiritual cleansing. Some things were a bit OTT (over the top), but it´s all part of the experience! 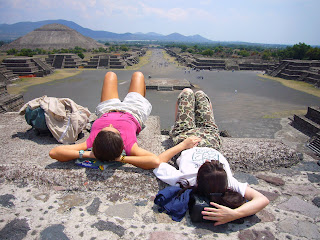 We walked a lot that day, and saw a lot of the city. We watched the world go by as people wheeled and dealed anything from fake copies of movies and CDs to 1 dollar sunglasses (and thus I was able to pick myself up another pair, let´s see how long these ones last!). It was a hubbub of activity!The next day we visited Teotihuacan, 50 kilometres from Mexico City. It was once Mexico´s biggest and most ancient city, the culture even preceding the Aztecs. Its enormity was overwhelming, as unlike Palenque, it has no jungle to hide amidst or behind. It was us, the monuments, and the sun! The impressive pyramids of the Sun and Moon are what the site is mostly famous for, as they loom high and large, and appear to dwarf the rest of the city! 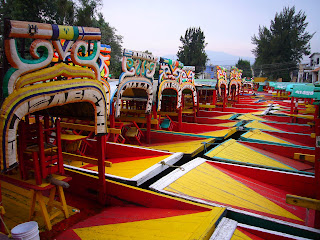 Xochimilco is another interesting place in Mexico City. On the outskirts, in the south, it lies on a series of canals and waterways, where you can take a gondola-type boat, and cruise these canals. It was raining when we went, so we did not indulge, but apparently such a trip, includes people in boats selling anything from food to flowers, as well as musicians strumming their tunes. I would immagine that it would be something akin to the floating markets of Bangkok. 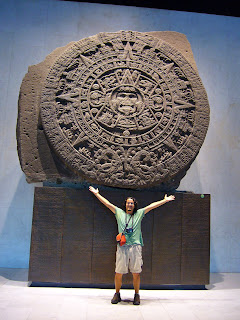 The day before we flew out to Egypt, we decided to visit the, also justly famous, National Museum of Anthropology. As far as I am concerned, it is amongst the top 5 museums I have visited in the world! It sits at the top, in my eyes, due to the presentation, and quality of information and artifacts. We spent 4 and a half hours there and were still unable to see it all! The museum is vast, and to do it justice, it truly needs a repeat visit. Easier said than done! Alex and I were astounded by the number of different peoples and cutures of Mexico, and it appeared as if each region was a different country! Oh, to be able to see it all! Hopefully, we will
be back. We left, physically and mentally exhausted! That night, we also spent relaxing and chatting to Claudia. We tried to watch a movie, but too exhausted, we fell asleep!

Finally, it was our last day in Mexico, and thus in the Americas! We took it easy, got ourselves organised, packed our bags, had a great last couple of Mexican meals (thanks to our personal chef, Claudia), and then the three of us made our way to the airport, via public transport, of course. Again, we were forced to say goodbye, and both Claudia and I had tears in our eyes….Claudia we await you in Australia!

Wow, we had seen and done so much! Everything from climbing mountains so high that our limbs ached with pain, to seeing children desperately search for food in a tip! But it was all worth it! We lived, we laughed, we cried and we learned!

Time to move on! Another day, another country! Egypt, here we come!

“To aquire knowledge one must study. To aquire wisdom one must observe.” – Jordan Dykes.

Dedication: This one is for you Alex! You are my passion and my joy! You are my truly amazing, compassionate, intelligent, sensitive and extraordinary partner, husband and soul mate. Travelling with you has been the experience of a lifetime, and despite all of my travels, this has been my favourite trip to date! Thank you for your love and acceptance, not only of me, but of the world! I hold you close to my heart and my soul, and that is where I keep and will continue to keep your energy and spirit for every existing second in this lifetime, as well as future ones! I am so incredibly proud of you, and I admire and adore you! You will never walk alone!

(Photos: 1.- Cowboy kid (future Pancho Villa), Puebla. 2.- on the streets of Taxco . 3.- Taxco- beautiful terracotta rooftops and colonial buildings. 4.- The Zocalo, or central square, was alway known as, and continues to be a central meeting point, centre of Mexico DF. 5.- Ombi and Claudia -Dreaming about how life was in Teotihuacan, near Mexico City. 6.- Colourful boats on the canal, Xochimilco. 7.- The infamous and original Aztec Sun Stone, found at Teotihuacan. Anthropology Museum, Mexico DF. 8. Ombi & Claudia, eating some of Claudia’s home- made enchiladas, with some extra hot and spicy sauce. )

Share
PrevPreviousThe many faces of Mexico.
NextAn assault on the senses – Welcome to Egypt!Next