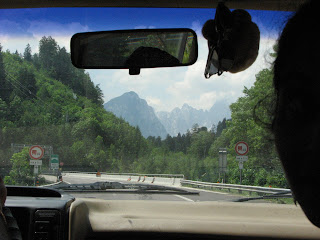 In no time at all we were at the appropriate train station, meeting the people who we would be sharing a ride with. Ananda was originally from Sri Lanka, and Mona from India. They were both living in Vienna now, and were off to Padua, Italy for a couple of days. We had organised to be dropped off in Udine, and then whilst they would continue on to their final destination, we would somehow make our way to Trieste. We would find a away! They were really lovely people, and our trip was pleasant. Needless to say, the views of the surrounding countryside as we passed through the Dolomite mountain range was breathtaking. I am not really a snow and cold weather fan, but I could not help but think how truly spectacular this must all look in winter! As we passed the border into Italy, we admired the various and tiny villages dotted around, and nestled at the foot of the mountains. Despite having been to Italy a few times before, this is an area I had never seen, and like all things different and new, there is always that feeling of enchantment. Besides, this part of the world does indeed look like it came out of a fairytale. 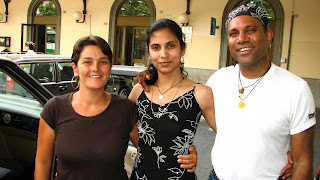 Before we knew it, we were in Udine. We had asked Ananda and Mona to drop us off at the train station, where we figured we could get a local train to Trieste. It was as good as done! We thanked them both, and in no time had organised a train. Whilst waiting, we met a lovely local family, also going to Trieste to do some shopping: Marisa and her children Marta and Fabio. As we chatted, I realised that my Italian was a little rusty, and rather infiltrated with Spanish. I was sure that it should not take me too long before I was able to think in Italian and thus speak at the normal velocity with which I speak both my mother tongue and Spanish. After all, I was in Italy, and you know what they say about practice makes perfect! 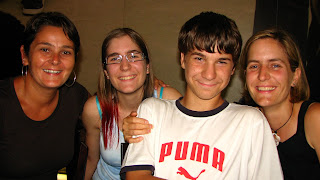 On our arrival in Trieste, Marisa asked us if we would like to come along with them to have what they beleived was the best gelati in Trieste. Alex whipped out a yes before I could say Bob’s your uncle! So, backpack and all, we made our way to Gelateria Zampolli, where we were offered a gelati. Alex went for the gelati, but I was much keener to have a coffee. Whist Alex’s eyes did a few back flips, as the gelati touched his palate, I found utopia the instant the first drop of expresso touched my lips! I had waited almost 10 months for this. Italian coffee is reknowned for being the best in the world, and I had not been let down! The problem with the coffee being THIS good however (as many of you who have been to Italy before would know), is that you spend the rest of your life comparing (and complaining about) the many and subsequent cups that simply do not cut it. So, I simply revelled in the moment, which was, without a doubt an OMG (Oh My God) one! As my Dad would say, I was as as happy as a pig in sh……..oops, mud!

Next, we had to look for a place to stay, of course. I could tell that it was not going to be as easy, or as cheap, as Central America. Another day, a different challenge! Firstly it is much more organised and the actual range seemed to be less than we were used to. Our first port of call was the Tourist Information Office, where we rapidly learned that our nights of $10.00 accommodation were well and truly over! Cheap in Trieste was a 45 euro room! And I do mean cheap, as most of the other rooms were in excess of 60 euros (1 euro is approximately AUD $1.60). So, 45 euros is what we paid at a place called Bed and Breakfast Lorenzo, with breakfast included, in theory. It was a clean and comfortable place, albeit with a meager and skeletal breakfast. 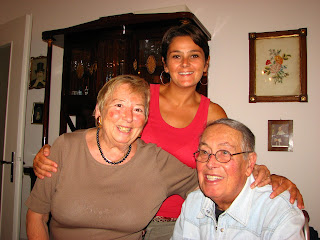 Our main reason for visiting Trieste was to see Nadia, so we called her up and organised to go and visit her and her husband, Arrigo, the next day, which was a Sunday. They live right in the heart of the city, only streets away from where we were staying. We spent a really lovely day together, reminiscing about old times. This is actually the third time in my life that I have seen Nadia, whilst the last time Dad did was when he left Italy all those years ago! We spent several hours chatting about our travels, life in Australia as well as Nadia telling us stories about my Dad, and how Pola (Dad’s birthplace), was in the old days. Whilst I have been to my mother’s birthplace, near Naples, I had never been to Dad’s. This is also on my to do list on this trip. Knowing your origins and ancestry, I beleive is both important and fascinating. It was, for me, yet another mission that needed to be fulfilled and accomplished! 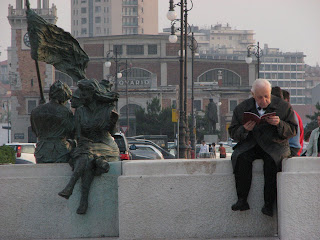 We spent a further day in Trieste, as its postion in the Meditteranean, nestled between the turquoise Adriatic sea and the hills is very beautiful, and warrants at least a day of sightseeing. We were not wanting to rush, but we were also aware, that due to many reasons, we would have to fly out of Rome on the 30th of June, and there were still other palces to visit and things to see. Antique gothic and baroque buildings, an enchanting waterfront promen

ade, ancient Roman ruins, the Piazza Unita (Trieste’s heart and also one of the largest squares in Europe directly facing the sea), Miramare Castle and people watching certainly kept us both fascinated and entertained.

Ah, people watching……..one of my favourite pastimes! Italians are indeed fascinating to watch! And the world over knows that to many, fashion and the clothes they wear are almost, if not more important than the coffee they drink! And I could not 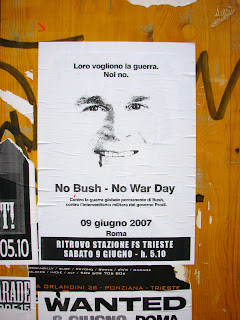 help but think about how happy I was not only be Australian and live in a culture which is not so obsessed with this, but on a personal level to not feel that designer clothes, make-up and hair maketh the person Ombretta Zanetti!

Our couple of days in Trieste had been and gone rather quickly, but I was excited, as our next destination would be Pola, or Pula as it is now known, as it is part of Croatia. 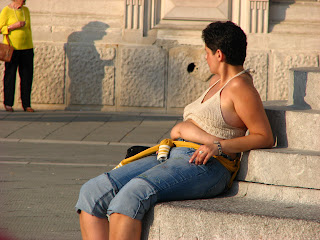 NOTE: I think it´s official! If what we saw in Trieste was anything to go by anyway…. Muffin Tops are back! Well, In Italy anyway! I mean, they ARE infront of us in the fashion stakes! Kath and Kim would have loved it, and Sarah Lee would have been proud, as we saw many style-mongers with layer upper layer!! Do you know that Australia’s Macquarie Dictionary named “muffin top” the word of the year in 2006. Thanks Kath and Kimmy, you put our country on the map! And thanks to you too Australia, you have given us so much to be proud about!

¨Minds are like parachutes. They only function when they are open¨- Sir James Dewar, Scientist (1877-1925).


(Photos: 1.- Driving to Udine, the Dolomite Mountain Ranges, Italy. 2.- With Mona & Ananda when we were dropped off in Udine, Italy. 3.- At Gelateria Zampolli, with Lto R: Ombi, Marta, Fabio & Marisa. 4.- In the heart of Trieste, near the waterfront, Italy. 5.- With Nadia, Dad´s godmother, and her husband Arrigo. 6.- Reading by the waterfront, Trieste, Italy.
7.- Melbourne is certainly not the only place with trams! 8.- It´s good to see that there are some George Bush lovers in other countries too!! This was a poster we saw in Trieste. 9.- The official ¨Triestina Muffin Top¨shot!)

Share
PrevPreviousRecharging our batteries in Vienna.
NextThe endeavour to find my father´s childhood home in Pola.Next