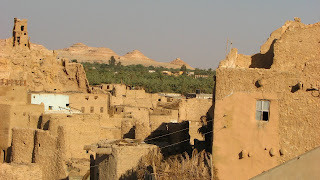 Cairo was full on, and we felt that we needed a little tranquility! We scanned our guide book and decided that Siwa Oasis (in the Western Desert) heading out north-west, near the Libyan border, sounded both exotic, and distant enough to provide us with some rest, relaxation and fun! Besides, we wanted to see a mirage! Heading out towards Alexandria by train, we then caught a bus on to Marsa Matruh, where we would spend the night. I must say that neither the buses nor trains here are particularly clean, and on several occasions, a plastic bag slipped over the top of the seat became my headrest, and several sheets of a (discarded!) glossy magazine became my cushion (the one I sat on!). That worked! We only spent a night in Marsa Matruh, before getting up early the next morning to catch another bus on to Siwa Oasis. Not much to report in Matruh……except that the food we ate was nice, and the hotel we stayed in was awful! 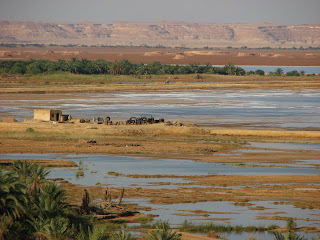 We arrived in Siwa by about 11.00am, and it was scorching! If you think it’s hot in the city, try mid-desert! I felt like I was in a dream. Everything was a beigy-sand colour, from the roads (which actually were sand!) to the buildings. The small township is nestled in amongst sand dunes, and has a series of eroded sandstone hills as a backdrop. It truly does appear as the proverbial mirage. We found a lovely little place to stay, and then we were off……………or, so we thought!

We have pushed ourselves through a multitude of barriers over the last nine months, but constant and searing heat (and remember, long pants!) is altogether another story. Long lunches are normally not our thing when we travel, but in that scathing heat, the option was surprisingly tantalising. East-West Restaurant, by the way, had great food at reasonable prices. Highly recommended if you end up in Siwa. It was here that we met Gerald, a Canadian guy. We spent several hours chatting, and relaxing (as we hoped we would). As it works out, Gerald is travelling around the world for a year, with his wife, Mary and 14 year old Torin. Aye, aye and cheers to them! We would later meet both Mary and Torin, and I want to say what a truly wonderful family they are. Torin, you are one of the luckiest 14 year olds that we know!

Apart from relaxing, we were able to fit in some other interesting activities…..like eating fresh dates and olives, for which the area is renowned. Strolling around the palm gardens is also very soothing. And it really is like a postcard…desert, desert, desert, and then plonk, a group of palm trees….which of course, are only there due to the existing water supply. The remains of the 13th century mud-brick Fortress of Shali, dominates the centre of town. It was fun to walk around and explore, as well as providing us with a brilliant sunset. It was on the highest peak that we met Adnan, who was here on business from Cairo. What a truly lovely and genuine person. Along with him we met some of his new found Siwan friends, who were also gentlemen. Sitting up on top of the world, and chatting…..living and learning. Could there be anything more to life!

I would like to include a poem (exactly as it was written), which Adnan sent via e-mail, and which I received in Austria several weeks after our meeting: 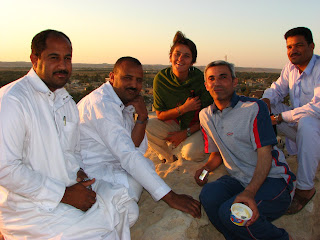 Why,why is Ombi amazed?
Is it because the faces she traced?
Or perhapse the places she faced,
So let her eyes gazed and gazed.
Ombi is nice,delicate and sweet
With siplicity,she tries to treat,
Look at her,your heart will beat,
You’ll lose your way or the street.
Alex to Ombi is a soul mate,
He is her love and only fate,
Look at them,what you state?
Hand in handand never be late.
Did you see Ombi contemplating?
For something,she was waiting
To know the meaning without hating,
In Siwa we met,fate not dating.

(A lyrical poem that can be sung one day in school. Dedicated for a dear friend met by destiny. By Adnan Kotate.)

Even the locals differ to those in the rest of Egypt, not just physically, but linguistically. The inhabitants of Siwa are predominantly Berber speaking , although many also speak Arabic, which they have mainly learnt due to tourism. The married women are known for their particular dress, which constitutes being totally covered , from head to toe, in black. This includes their feet, hands, and eyes. A black gauze covers their eyes, so that not a thing can be seen. On top of this sea of black, is often a beautifully embroidered blue coloured cloth, particular to this area. Before marriage, the women bare all but their faces, and some of them are striking. Perhaps due to earlier invasions, such as those by France, we saw the likes of women with coffee coloured skin and striking blue or green eyes.

Siwa has no shortage of natural hot and cold springs. After all, this how an oasis comes into being. We walked to Cleopatra’s bath, which we decided not swim in. As a local told us, the name was chosen as they knew it would be a crowd puller! Bingo! Close to this spring, we also visited The Temple of the Oracle. Similar to the Shali Fortress, it is a labyrinth -like structure that sits at the edge of Aghurmi township (only 4 kilometres from Siwa), and upon reaching the top, the views of the sand dunes, palm trees and surrounding desert are brilliant. The structure was built in the 6th century BC, and it is said that it was in this place that Alexander the Great consulted the oracle (thus the name of the temple). It is one of the most revered oracles in the ancient Mediterranean. 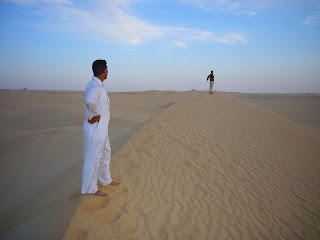 The highlight of Siwa, however, was the afternoon “Sand Safari” we undertook with Abdu, of Abdu Safary(he can be contacted on azmy_safary@yahoo.com and his English is great). This consisted of four wheel driving over some impressive sand dunes and then relaxing in some hot as well as cold springs. Abdu’s sand burnouts were phenomenal, and I heard myself scream a few times as we flew down some with near 90 degree drops! You rock Abdu! Again, I felt like I was the moving object in a postcard…there we are flying over the sand dunes, when, all of a sudden, we drop over a really tall one, to be confronted with palm trees, and a bubbling hot spring! No, it’s not a mirage, it’s an oasis! We plonked ourselves in paradise, and soaked in the sulphurous water bubbles! After a little while, we dried up, and jumped back into the jeep. And just when we felt that it couldn’t get any better, as we topped another magnificent crest on the edge of the Great Sand Sea, there was Bir Wahed. Bir Wahed is a cold freshwater lake, which like its warmer sister, the hot spring, seems to jump up out of nowhere! As we drove towards it, I rubbed my eyes like the children in the Tales of Narnia……….could I be seeing what I was seeing? Sand, sand , sand and more sand, and then………… all of a sudden palm trees and a huge pool of water! We had found heaven. 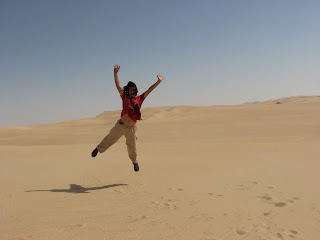 Like all good things, they come to an end, and in a quest to see some more of Egypt’s world renowned sights we decided that Luxor and Aswan would be next. The trip to get there is a story unto itself!

‘There is nothing like returning to a place that remains unchanged, to find the ways in which you yourself have altered’. – In the words of Nelson Mandela, in his autobiography, A Long Walk to Freedom. 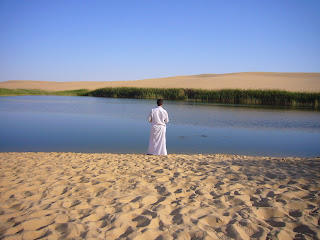