Our even briefer flirtation with France. 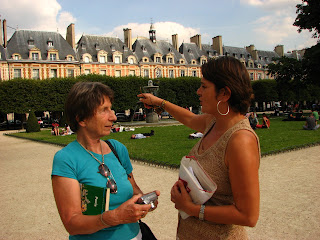 We were arriving to France on the evening of the 1st of August and flying out to Germany on the evening of the 4th. That really was not going to give us much time in the land that made baguettes and camembert cheese famous , but we were about to give it our best shot. It’s the only way we know how!

We were so relieved to see Eva there waiting for us. It had been hard yakka, the last 24 hours! Eva is a lady that we met in Mexico a few months earlier. Alex and I were extremely impressed by the fact that she was travelling alone, and doing things that “people of her age” often don’t do. I had looked at Eva, and figured, as well as hoped, that down the line, I would be doing exactly the same thing as she was………still travelling! 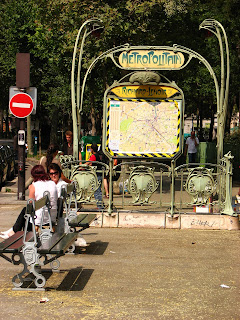 Before we knew it, we had bundled all of our luggage into her car, and were on our way to her house. She lives in Chilly-Mazarin, some 17 kilometres south of Paris, and only some 7 kilometres from the train station where we were being picked up from. The scenery was lush and green and undulating. It felt very peaceful and tranquil. The calm after the storm! In no time at all we had arrived at Eva’s apartment, where we were escorted to “our room”. We then had a delicious dinner that Eva had prepared for us, including baguette, a variety of French cheeses, and a spinach pie. Yum! Did I mention the red wine! What a pleasant change from the monotonous and repetitive tagine and couscous dishes we had had in Morocco.

With only two days in Paris, Eva told us that she would take us sightseeing. Luckily for us, although August is hot in Europe, it is also the month that the locals go away on holiday, which means that one can drive around with relative ease, as opposed to this virtually being an impossibility during the other 11 months. So, we spent two fun filled days, packing in both picnic lunches as well as sights! This is my second time here, but Alex’s first, and so we set out to do, amongst other things, the Parisian “must dos”. 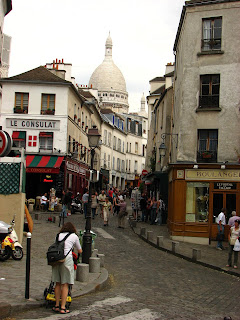 On our first day, we headed into the city, and our first stop was a picnic at Park Monceau, a park which seemed rather more English than French, but nonetheless, a serene spot to have our lunch. Also a fine spot to people watch. Next was the area of Montmarte, perhaps mostly well known for the famous church of Sacre Coeur. The entire area was abuzz with WAY too many tourists paying WAY too much for food and drinks in a very “oh to be seen area”. I can never wrap my head around those tacky “I will paint or draw or make your face into a cartoon” numbers that always ONLY seem to take 5 minutes, and are ALWAYS ludicrously costly! Horses for courses! Sacre Coeur is undoubtedly a Parisian landmark, not only due to its magnificent edifice, but also due to its location, on the highest point in the city. The views are superb; a sentiment undeniably shared by the hordes of other visitors there as well. 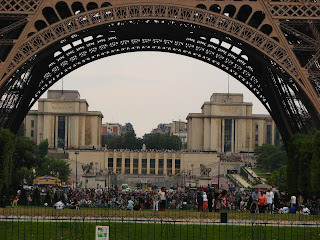 Now, what would a trip to Paris be without a visit to the Arc de Triomphe, the Champs Elysees and the ultimate French global icon, the Eiffel Tour? The tower is 324 metres tall and weighs 10 100 tons. Impressive stats, I thought! They are all must dos anyway, and so we did them all! And what a pleasure it was to have a car, as we were able to do them all…cruising! We did stop near the Eiffel Tower, however, and walk around it. Despite all its publicity, and the fact that it has been done to death, it truly is quite a spectacular structure. And to think that when it was first built in 1887, the French thought that it was ugly and an eye-sore! Oh, how things have changed! Say France or French, and the words “Eiffel Tower” will undoubtedly be the next two to tipple off your tongue! We saw Notre Dame too, albeit in the distance. That counts, doesn’t it? Finally, we visited the Les Invalides, which is a complex of buildings and gardens pertaining to France’s military history. It also houses the tomb of Napoleon. This was another pleasant place to stroll through. 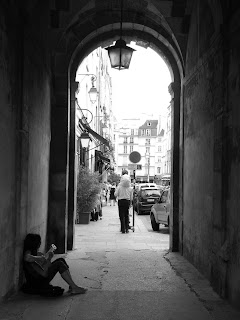 After all of this, we were rather tired, and so decided to go back home. Back in Eva’s comfortable apartment, in a serene area, we relaxed, ate, chatted, and used “Internet Eva”.

Day 2 was another fun filled, if not full-on day. After a bit of a sleep in and a blithe breakfast we were off again. Eva had graciously packed us another picnic lunch. Today, we actually went past lots of places, many of which I cannot recall, but I do remember thinking how exclusively French so many of the buildings looked. We went past the Railway Houses, which housed the city’s railway workers in times bygone, as well as visiting the city’s Botanical Gardens, complete with wallabies……for visiting Aussies, no doubt! Here, we strolled around and had a picnic lunch. It was then onto Place de la Bastille, where the French Revolution supposedly took place. We then took a pleasant walk along the Canal St Martin. The last stop on day 2, was the Place des Vosges, with its flamboyant Gothic architecture. The square, surrounded by 36 symmetrical townhouses, was built some 400 years ago. It’s in a rather trendy part of town, and quite pleasant to stroll around, and again, people watch. Paris offers so much in the way of culture, design and history. To say that we did it all in 2 days would be ludicrous, but I think we managed to get a reasonable overview. The 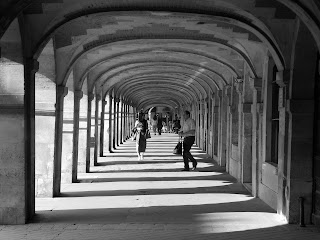 insights afforded to those who spend more time in a place, however, were this time not available to us….precisely due to the very fact, that we simply did not have the time!

We finished up our day with a great Indian (or was it Pakistani, Eva?) meal, in a place that was good value and had great tasting food, in humble surroundings. Just the way we like it! By this time, it was almost 8.00pm, and Eva dropped us off at the closest train station, from where we took a train to a hotel we had booked very close to Charles de Gaulle Airport. All we needed was a place to crash for the night, as we had to get up early to fly to Stuttgart, Germany, the next morning.

We arrived at Premier Classe Roissy at around 10.00pm. We checked in, showered and went to bed. Small, clean and extremely cheap by Parisian standards (29 euros), it was really all we needed. If you need a place to stay near Charles de Gaulle Airport, we highly recommend it.

After 2 days of “been there, done that” we fell asleep, totally exhausted!

NOTE: Alex and I would like to sincerely thank you Eva, for all that you did for us during our brief stay in Paris. We would never have been able to see all that had we tried to do it ourselves. So, thank you, thank you, thank you! We hope we can repay the favour when you come back to visit us in Australia!………Eva actually knows Australia well, having worked there as a nurse….was it in the 6o’s, Eva? She has also revisited Australia on a number of other occasions. Come again, you will always be welcome!

Next: Our brief flirtation with yet another country continues. This time, Germany!

(Photos: 1.- Ombi and Eva outside Place des Voges. 2.- The infamous Parisian metro. 3.- Montmatre, with Sacre Coeur in the distance. 4.- The Eiffel Tower, and the throngs who come to visit it. 5.- Reminiscent of years bygone – the area near Place de Vosges. 6.- Again, Place de Vosges – definitely one of Paris’s most romantic spots. It’s exactly what you would expect Paris to be, and exactly as you imagine that it once was!)

Share
PrevPreviousAt last some R ‘n’ R, and then back to Europe.
NextDestiny – seeing Michaela in Germany after 18 years.Next