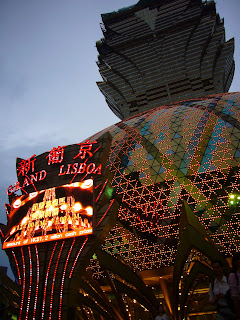 Now Macau, where is that? Well, if you thought that Hong Kong was small, welcome to Macau (also spelt Macao). Lying 65 kilometres west of Hong Kong, it has a population of 480,000 and is just 28 square kilometres in area. It is a tiny country steeped in history, and due to its having been colonised by the Portuguese in 1557 and subsequently being governed by them until very recently, it has an interesting and colourful past as well as cultural mix. In 1999 however, it finally passed from Portuguese hands back to Chinese ones, and like Hong Kong, was made an SAR (Special Administrative Region). Although its two official languages are Cantonese (technically a Chinese dialect) and Portuguese, not many people speak the latter. Whilst 95% of the residents are Chinese, the remaining 5% are made up of Portuguese and Macanese (people with mixed Portuguese, Chinese and/or African blood). With a fusion like this, which manages to seep into many facets of the Macanese lifestyle, the total sum of this little spot really does amount to more than its infamous casinos and gambling!