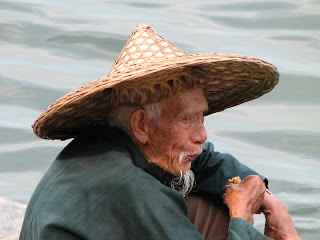 Think China! Think Yangshuo! With its famous fairytale karst peaks, one after the other after the other, the landscape is exactly what the mind conjures up when thinking of China. I was just waiting for a man with long braided hair and a long wispy moustache to jump out in front of us and the image would have been complete! The town’s otherworldly landscapes are mesmerising! We spent a good week here, staying in various hotels, and seeing Yangshuo as it is seen best, by bike! Despite the fact that several tours abound, a bit of pedal power gets you off the beaten track, and cheaply allows you to stumble across old bridges, fascinating landscapes, and minority groups in tiny villages that look centuries old. Our Chinese is shocking, but a broad smile and a hearty Ni Hao (hello) brought a smile to many of these people’s faces, as well as more than curious stares (who are these weirdos on bikes, and why do they seem so interested in us and our dot of a village anyway?).

The centre of Yangshuo itself, has become a bit of a foreigners magnet, with all of its bars and western restaurants, but one only needs to duck off into the side streets to find the real Yangshuo, including the more traditional things, and obviously cheaper food. Besides, the countryside is only minutes away by bike. We mostly stayed in town, but we also spent a couple of nights out at the Snow Lion Resort, run by the charismatic Linda and William. It was an oasis of calm and tranquility, and also the place from which we did some exploring even further afield. Heading south west, we cycled towards Liu Gong village. It was a superb ride, albeit extremely rocky, and the views were phenomenal…peaks, villages, ponds, trees, rolling hills, children running and playing, workers in the fields. I had mistakenly understood that it would take an hour to get there. After an hour and a half however, we had to call it quits. It was 6.15pm, and the sun was setting (that was another impressionable sight to behold!). I HATE not reaching my final destination, but cycling back in the pitch black of a countryside we knew little of did not seem to be a viable option. So, we opted for Plan B, which was to hammer home! We made it back in 45 minutes, much to Linda’s surprise. I had a searing pain in my butt to prove it! That night I felt like a baboon! It could well be argued that I looked like one too! 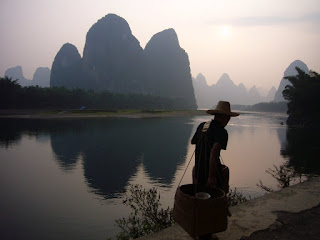 On another day, we took a short bus ride out to Xing Ping Town, from where we did a boat ride along the Li River. Whilst the views were also gorgeous, I would also add that they were perhaps not that different to what we saw by bike, and the latter option seems “less” touristy and “more” real. It was a town also worth visiting, as the crowds mostly do the boat ride and not much else. This means a lot to explore without all the people of Yangshuo. I loved walking in and amongst the tiny alley ways, with traditional wooden houses and simply watching the locals entertain themselves in their day to day activities. Alex and I also partook in a half hour hike up a hill, Mt. Raozhai, very close to the waterfront, and despite us being totally saturated in sweat upon reaching the summit, the panorama, yet again, was awe inspiring. 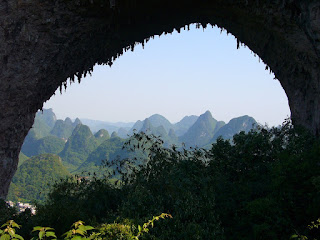 Closer to the centre of Yangshuo are some touristy must do’s. No trip would be complete without a visit to Moon Hill, a limestone pinnacle with, surprise surprise, a moon shaped hole. It’s only a 7 or 8 kilometre cycle out of town, and we chose a day where the sky was a bright, bright blue! The locals told us it was the best day they had had that year! I should add that due to the hot and humid climate of the area, the skies can vary from a hazy grey, where it’s hard to see even the closest peaks, to the jackpot we scored that day! On the way we passed the Yulong River, complete with bamboo rafts and the locals who managed them, ready to transport people and bikes at will. Moon Hill was definitely worth the half hour hike up, and I have now run out of adjectives to describe the stupendous views! The Banyan Tree reserve close by, however was a real let down. The Chinese not only have a penchant for charging for anything and everything (including things that occur naturally), but they also love turning nature into an Asian style theme park. So, yes, the 1400 year old tree was interesting, mainly due to its age, but the Holy Grail like shrine around it, needless to say, was not! 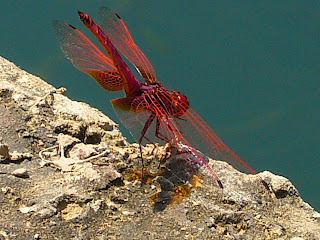 The “theme park” came complete with dressed up monkeys in chains, and feathered friends with extra headpieces! Would we like to have a photo taken with these “caged” animals! No thanks!! Speaking of animals, we did see dog on a few menus here! True!

Another day, we rode along another section of the Yulong River, all the way to Dragon Bridge. At times, when we weaved in and out of the amazing karst topography, we felt like we were on another planet. The moon perhaps! Then all of a sudden, a tiny village would appear, and we would be reminded that we were indeed on Earth.

Amongst the places we stayed at in town were Bamboo House Inn and Cafe (there are two of them, and they are run the gorgeous Rosie and her family), and 7th Heaven Cafe & Hostel, also run by Linda and William. Both were fantastic places with fantastic food. The former had excellent coffee (made with an Italian espresso coffee pot to boot!) and a huge and tasty breakfast, whilst the latter (despite its claim to having great Western food), also had great Chinese food! For the first time in ages, I felt like I was able to eat something without having to dodge something from the carnivore club! Alex and I highly recommend both of them! Although we did not actually stay the night, another place noteworthy of a mention is The Giggling Tree in Aishanmen Village, 5 kilometres from Yangshuo. Run by a hospitable Dutch couple, it is set in the countryside and has a mot relaxing feel about it. It’s close to the “action”, yet far enough away from the maddening crowds to make you feel like you are one of the last people on Earth. 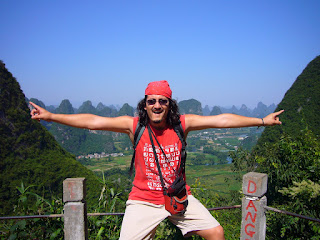 Did we really spend 8 days in Yangshuo and its surrounds? Absolutely! With only a one month visa, it was definitely time to hit the road again!

Oh, and definitely my favourite sign yet (along with Wan Kee under the Nike sign) is the Wankelong Shopping Centre, in Yangshuo. Please explain? I think even Pauline Hanson would get that one!

NOTE 1: Check this out for some good old Chinese censorship.

NOTE 2: Oops! I’m sorry you just received this same blog without the photos. I hit publish by accident. I hope this version was the more enjoyable! 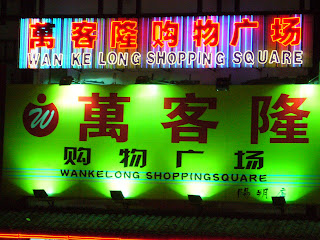 NEXT: The spectacular Longji Rice Terraces of Guilin, and then heading out west. Was it wild? Read on and find out!

(Photos: 1.- The man with the moustache did jump out infront of us! 2.- Reflections along the Yulong River. 3.- More reflections – spectacular for us, and work as usual for others! 4.- Moon Hill. 5.- Red dragonfly, Yulong River (I took that one!) 6.- Flower in bloom, along the Yulong River. 7.- Alex on top of the world…..well on top of Moon Hill anyway! 8.- The Wankelong Shopping Square! This one’s especially dedicated to all you Aussies out there. C’mon ya gotta luv this one!)