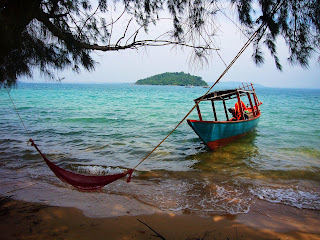 As I have already mentioned, Cambodia wins no prizes in the outstanding road stakes. It’s a poor country, and its roads reflect this. The “main drag” from the capital to Sihanoukville was no different. The countryside certainly reflected the nation’s poverty, and as always, it’s interesting to be the quiet observer. Local transport always gives one the opportunity to do this. Sihanoukville is effectively Cambodia’s beach town getaway, but it’s still light years behind most Thai resorts and beaches. This alone , however, surely has to be an enticing thing! 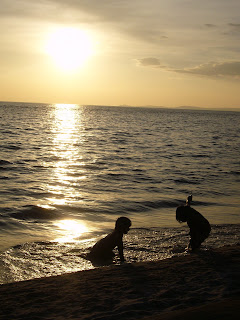 Upon arrival, we caught a couple of motorbikes (drivers included!) in a bid to look for some accommodation, as the main sleeping area was a ways from the bus station. What a sight we must have looked, flying along the road, complete with two humongous backpacks hanging off us! It did not take us long to work out that although we had not paid a lot to be driven around, that the drivers were taking us to places where they would get a commission. After stop number two, we thanked them profusely, and scuttled away to look around ourselves. It is always the cheaper option! We eventually did find a nice little room in a place that was made of wood and set up on stilts. It was close enough to walk to the beach, but far enough that we could fall asleep at night without the echoes of duf-duf music!
It was lovely to be able to just hang out and relax on a beach. Actually, it had been so long since we had done absolutely nothing! Being a tourist is easy, being a traveller is not! Most of our time was spent hanging out on the beach……my hobby being running along it, and Alex’s eating on it! There was always some vendor walking along and selling various tidbits, like fruit or grill

ed seafood. Speaking of seafood, it was a great place to indulge, and most nights were spent at one of the various beach front restaurants (read: tables and chairs on the sand, only metres away from the sea). No problemo, we vegetarians were also well catered for, and I had night after night of some truly excellent cuisine, mainly in the form of curries. The green curry in particular was top notch! Imagine…..tables and chairs on the beach, relaxing by the moonlight, and eating fresh and yummy food! We were definitely onto a winner! As far as how “beautiful” the beach was is debatable. Rubbish everywhere! That always ruins it for me! A believer in “leading by example”, one day Alex and I walked along the beach, with two plastic bags, and filled them up to the brim with scattered trash. The freaks were back! Our biggest stares were from the locals! I am always saddened by the sight of garbage strewn everywhere, and am mostly infuriated when foreigners throw it. They do not do it in their own country (or maybe they do), so why do it in somebody else’s? 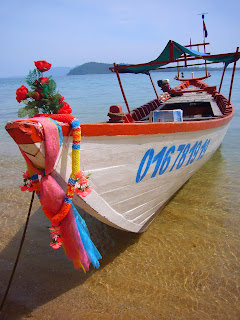 There are a few beaches in and around Sihanoukville. We decided to stay at a place called Serendipity Beach. It’s also a place surrounded by little islands and reefs. We had heard that the diving was only average, compared to Thailand, so we decided to save our money, and do a little snorkeling instead. There are many operators who organise day trips, so we chose one (they all seemed much of a muchness) and just went with it. Our snorkeling day trip proved to be both fun and relaxing, with a stopover on an almost deserted island (I can see that that will not be for long though!), where we also had a picnic lunch. There were a few (overpriced!) bungalows on the island, and a few bar/restaurants with even more overpriced cocktails. I could not help but think that this would eventually become another Phuket. One can only hope not! From what we were looking at, the odds were stacked against it. 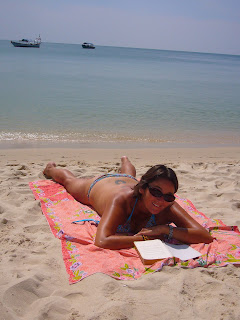 On another day, we also hired a bike and visited the local market. Lots of fruit, veggies, food, people, and information (too much of it!). There are parts of the markets we visit that I simply refuse to go through. The meat section is one of them! Sorry, I just don’t do slabs of unrefrigerated meat, under hot tin roofs with flies hanging around! Guess what those flies use as a landing pad? In many of these markets, the hygiene has been appalling; well, the hygiene that I am used yo any way!

We also cycled to a beach called Victory Beach, which used to be the original backpacker hang out. I must say, the beach is hardly very enticing, nor are the people who seem to frequent the area. I found the whole area rather seedy and full of grotesque foreigners with young Cambodian girls. Prostitution is indeed a huge problem in Cambodia, and also huge is the amount 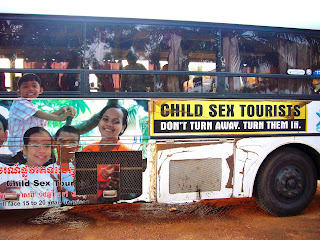 of foreigners, with neither morals nor social conscience, who go out with these prostitutes! Whilst I pass absolutely no judgement on these women, I do on the men! Get a grip fellas, do you think these women are with you because you are hot……or because you can provide them with more in a day than they can make in a year! I would imagine that with the paltry wages women make in Cambodia being taken out for dinner for a night, and perhaps being given a piece of jewellery is not only a luxury but a big deal indeed. Not to mention the food for the family, that that newly acquired (tiny amount of) money might buy!

Siem Riep and Angkor Wat were going to be our next destination, but yet again, we would have to go through Phnom Penh (remember, all roads lead to Phnom Penh). At the very time we would be passing through, there would be Bon Om Tuk, the water festival is held here each year sometime between late October and November. Boat races are held on the Tonle Sap river and up to 2 million people are supposed to flood the capital for fun and frolics. Finding accommodation is supposed to be a nightmare! Neither of us were in the mood to find out, and besides, time was running out, as we would be meeting some friends (more of this later) in Bangkok at the end of November for a Thai wedding. We had been told that we would not be able to go straight through to Siem Riep as the traffic in the capital would be horrendous, which it was. The capital was full of party goers, and it was crowded to capacity, but we did find a bus that would be going on to our final destination, thankfully, where we eventually arrived quite late at night. 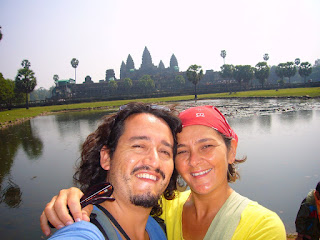 It was probably around 8.00pm, and we were exhausted. It had been a long day, and all we wanted was a place to rest our weary heads. It’s never that easy though, is it? So, we trudged around until we found a place to our liking, and we finally did! Once in Siem Riep, apart from wanting to rest my weary head, the only thing I wanted to know was….”Who won the election????”. We were travelling on election day, and I was anxious to get the results. So, we walked around for a while, whilst I asked a few people, “Are you Australian?”. I am pretty good with guessing nationalities, so it did not take me long to find a compatriot. And YEEEEEEEEEEEEEEEEEEEEEEEEEEEEEEEEEEEEES, the race was finally over for Johhny Bush (or is his name George Howard?), his “presidential” term was over, and he even lost his own seat!!!!!! Johnny who? Perhaps there is a god after all!

“If you don’t run your own life, somebody else will” – John Atkinson.

Share
PrevPreviousComing face to face with Pol Pot and his brutal regime.
NextAngkor What? in CambodiaNext