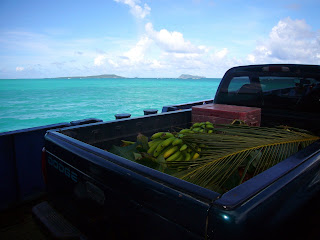 The average tourist on a two week sojourn through Samoa usually only gets to Upolu…..well, we aren’t “average” and we like to think of ourselves as much more than tourists. This, I feel, is glaringly obvious to most of you by now! Being the culture fanatics that we are, we were going to try and see as much as we could (without cramming) in the short amount of time we had, so clearly, Savai’i, was on the agenda!

Getting there proved to be easy enough. It was a half an hour or so bus ride to Mulifanua Wharf, on the west side of the airport, and before we knew it, we were on a ferry going across. It’s only 20 kilometres to Savai’i, and the trip was supposed to take a little less than an hour and a half. The sea was crystal clear, and I was looking forward to kicking back and relaxing on the boat! I….don’t ….think…….so!!!!!