Everything happens for a reason, or so they say! One good thing to come out of the stuffing up of the dates on our Samoa trip was that we would come back one day earlier, actually giving Alex some time to organise himself to fly out to the States (originally, we would be arriving back in Melbourne on the Saturd 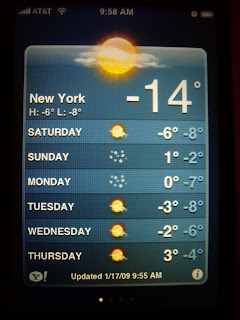 ay and he would be flying to the States the next day; the “updated” version saw us arriving on the Friday, which at least gave him a day to pack). In hindsight (which is truly a marvellous thing, most would agree), he would have been pushing to get himself ready and packed, based on the original schedule. Part of the getting ready phase was as much psychological as anything else, as Alex mentally prepared himself for the transition from laying on a beach in Samoa to the snow and minus temperatures he’d read about in New York! 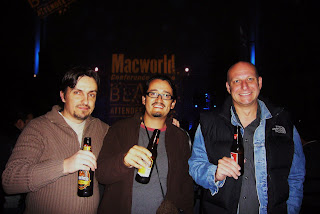 What was Alex going to the States for, and why wasn’t Ombi going? Well, no we’re not velcroed together, but for all reasons pertaining to travel, I wouldn’t mind to be. On a serious note, he was off to San Francisco to attend the “Apple MacWorld Conference & Expo”, on a scholarship he’d won through Melbourne University, where he works in IT. In plain, un-techy language, it means that he went to a conference that delved into all things to do with Apple Macs (to all of you other techno dyslexics…..they are a type of computer, not a new species of apples!) After his week in San Francisco, he also flew to New York to see his mum and little sister, Angie. I was saving my holidays for a New York/ Ecuador trip we had already booked for 5 weeks in May and June of this year. 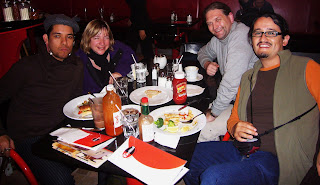 As I was not there with him, this entry will be short and sweet (a rare occurence!), and I will touch upon some of his highlights. Whilst in San Fransisco, Alex stayed at the Hotel Des Arts, which our friend Richard originally found. Now, you may recall me having mentioned Richard and Jo before. They are two of our dearest friends, and “co-partners in crime” in as far as they love to travel and explore the world on par with Alex and I. We usually play travel tag team, whereby either one of the couples is overseas somewhere. Whilst Alex and I were on our 16 month sojourn, they somewhat grinned and beared it. Now, it was their turn, as they took off in early January to do Central America for 6-8 months. Why would I be jealous? I’d already done it, right? Wrong! Anyway, they would be flying to Central America via LA and San Francisco, and would be in San Fran around the same time as Alex, so…….they would be able to catch up…..and they did….and stayed in the same hotel! Now, you simply MUST take a look at their blog, http://www.thedemeesters.blogspot.com%27/ The photos are amazing! 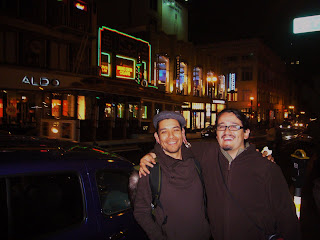 So, it goes something like this: Ombi (the single girl!) meets Jo and Richard in 1999 on a windswept plain in Patagonia, Argentina. They become friends. Ombi keeps travelling, gets to Ecuador and falls in love with Alex. Upon Ombi and Alex returning to Australia (2000) they catch up with Richard and Jo, and a strong bond and friendship is cemented. Fast forward………in 2007, as part of their trip around the world, Alex and Ombi meet Ricardo, a Mexican-American, in Guatemala, and another new friendship is born. In January 2009, Alex, Richard, Jo and Ricardo (who lives in San Francisco) all catch up and have dinner together! Now maybe I am getting a little excited…..but you can’t tell me that travel doesn’t rock! You have to love a story like this!

After almost a week, Alex flew to New York, where he spent some quality time with his mum and sister Angie. It wasn’t a week of outings or excursions, but just a time for Alex to reconnect with his mum, and spend some quality time with her. I was so glad that he was able to do this, and I know that he was too. He has a very special bond with his mother, especially considering that they have lived so many years apart. Alex tells me that they chilled out, went shopping together, and just relaxed in each other’s presence. Alex’s happiness will always be my happiness, and knowing how much this meant to him meant even more to me. Saying goodbye to her this time, I believe, wasn’t so hard, as we are both going back there in May of this year. I know, you can’t take that travelling “thing” out of us now. It’s too far gone!

As you can see, this is my very brief take on Alex’s two weeks away. Most of what he felt remains in his heart, and without a doubt, what my words (for once!) cannot convey, his photos will!

“The meeting of two personalities is like the contact of two chemical substances: if there is any reaction, both are transformed”. – (Carl Jung, 1875 – 1961)……… to all the friends, both near and far who have transformed my life……..I love you all, Ombi.

(Photos:1.- Alex and Angie at the Jackson Heights train station in Queens, NY. 2.-Minus 14 degrees celsius in NY. 3.-Alex at the Apple MacWorld Conference & Expo in San Francisco. 4.-L to R: Ricardo, Jo, Richard and Alex catch up for a meal and a chat in San Francisco. 5.-Ricardo and Alex in San Fran. 6.-Alex and his mum, Rocio, in Jackson Heights, Queens, NY. 7.- Alex and Angie having some fun in New York. 8.-Angie and Alex , with the Empire State Building, Manhattan, in the background).