Doin’ it Thai style … hanging out with the locals

Packed and ready to go, the next part of my adventure was about to begin. Pong’s parents, Chai and Ta, have a holiday house in Kanchanaburi province, but since Chai retired a few years back they go there much more frequently. Pong made me out a handwritten map, with excellent directions in Thai. I had to first catch a bus to Kanchanaburi, and then an ongoing bus to Thong Pha Phum, from where her parents would pick me up. Their house is then some 10 kilometres away.  Pong’s map was a bonus!  As a backpacker, I am accustomed to playing it by ear and winging it. Having said that, mobile technology has most certainly changed the way we do things. With all of us liaising on our mobiles, pinpointing my pickup was easy. Many would argue that this takes some of the fun and excitement out of travelling. Hmm, another discussion for another day.

Meanwhile, I was picked up at the tiny bus station in Thong Pha Phum by Pong’s parents. I must say, I got a great vibe from this tiny town wedged between shaggy karst mountains. No tourists, and very traditional.  I knew I was going to love it!  As is often the case, the bus station was right next to a market, and you all know how much I love markets. Chai and Ta arrived soon after me and there were hugs all around.  I had met them both at Link and Pong’s wedding in 2007, but very briefly. Ta bought a few more bits and pieces in the market and I followed her around.  The word had gotten out … Ta is a fantastic cook! 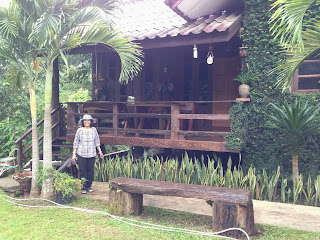 We drove the short distance to their house which was made of wood and was surrounded by lots of trees and foliage.  As soon as we walked through the front door, I immediately fell in love with it as the dining area was out in the open and the house backed right onto a stream. My ‘room’ would be downstairs; a tent set up in another open area with the sound of running water as my backdrop.  You can’t imagine how soundly I slept that night!

Ta weaved her magic and made a number of amazing dishes that night. Names not known, tastes to die for! The pictures tell a thousand words. I just loved Chai and Ta! Chai’s English was really good, whilst Ta and I communicated using lots of sign language, which seemed to work no problem.  I am a firm believer that if you want to be understood you will be. When I went to bed that night I just felt pure bliss.

The next day was lots of fun.  After a lovely breakfast, we went to Hin Dat Hot Springs. The naturally hot spring water is between 45 and 55 degrees celsius. Must say, after an hour there I felt like I had been hit with a shovel! Chai took us to a great place overlooking the jungle for lunch and then it was time to go home and chill … to be later followed by another round of Ta’s amazing food.

Over a couple of days that I was there, I also met a number of Chai and Ta’s friends who had also retired and come out to live in the countryside.  Some came over and others we went to visit; all within walking distance.

The next day was a busy one and we visited a number of places.  There are some spectacular national parks with some phenomenal views. Khao Laem Dam, officially known as Vachiralongkorn Dam, is only six kilometres from Thom Pha Phum. At just over a kilometre long and 92 metres high and with spectacular scenery around it, it’s quite breathtaking.  There were lots of monkeys around and there are signs everywhere telling you not to provoke them.  I got a bit too close to taking a photo of one and he was not a happy camper.  I had to scuttle back, as he inched towards me with a don’t mess with me look. Was not quite expecting that!

We also visited the famous Three Pagoda Pass near Sangkhlaburi, where Thailand borders with Myanmar (Burma).  The three pagodas for which the pass is named are quite small, but it’s the history and fact that it’s a border crossing (sometimes!) that makes it interesting. I had been here many years ago as a backpacker; yeh, still a backpacker and still young! It’s where you come if you want to see Myanmar without really seeing Myanmar, you know, like Clayton’s drink. I will have to dig up my old photos; the place has most certainly changed in some 20 years or so since I first visited, as all places do really.

Sangkhlaburi is a very interesting place too. It’s a brilliant example of a border town’s ethnic spectrum, with a mix of Burmese, Karen, Mon and Lao as well as Thais. The mix is evident as you look around. Even if you can speak Thai, it may not necessarily be all that helpful here as so many other languages are spoken. Ta and I made our way across the famous yet somewhat unfortunately named Wangka (thankfully also known as Monside!) Bridge. Its claim to fame is that it is a picturesque rickety wooden bridge, but perhaps it being rickety was also its downfall … quite literally! Very recently a flood or storm had swept half of it away! So, the picturesque bridge quite literally stops halfway, and drops into, well, the river below!

We also visited some lovely temples in the area, including Wat Wang Wiwekaram. It’s always lovely to walk around temples and observe the beautiful architecture.  What I liked about the ones that we saw around Sangkhlaburi was that I was the only tourist and so I was able to observe the locals in their own habitat.

What a day!  We had seen and done so much, yet once again Ta weaved her culinary magic and I was treated to yet another spectacular Thai meal.  I was most certainly going to miss Ta’s food.  I asked her if she was interested in coming to Australia and being my personal chef!

The couple of days had gone far too quickly, but I had seen, done and eaten so much. It was easy to understand how Pong had turned out to be such a wonderful person; she has two wonderful parents, who I was most certainly going to miss. The morning that I was to make my way back to Bangkok, we went to visit some of Chai’s friends as well as a Burmese family, who all lived within walking distance.  Being so close to the border, there are a number of Burmese refugees in the area. The war between Myanmar’s (Burma) army and the jungle-dwelling Karen ethnic group has been running for 63 years and is ongoing. The civil war is often labelled the world’s longest. Needless to say, the Burmese are desperate to get out and will try anything in their power to do so.  Tragic!

With hugs all around, I was back on the minibus to Kanchanaburi, where I would have to change once again for Bangkok. I promised them both that I would be back with Alex. I waved to Chai and Ta until they were out of sight … and then I cried. It’s the part of travel that I least like … saying goodbye.

Bangkok awaited me.  My last few days would be spent shopping and just hangin’ out in one of my favourite cities.  Bangkok, you never, ever disappoint me!

Dedication: Chai and Ta, I would like to thank you for your amazing hospitality over the couple of days that I spent with you. You showed me your kindness and warmth in everything you did. It made my heart sing to see the smiles on both of your faces. You now have a place in my most special place, a place I only reserve for special people, in my heart. I look forward to seeing you both again very soon.

Share
PrevPreviousWhen the going gets tough … travel!
NextOne night (OK so it was four) in BangkokNext