Deeper into Ecuador’s Andean Highlands; Chimborazo and the Quilotoa Loop

Whilst staying in Guaranda we decided to do a day trip to Mount Chimborazo, only some 50 kilometres away. Whilst it had been thought to be extinct, new studies show that it is actually active, having erupted at least seven times during the last 10 000 years; nothing on record however. The mountain was once considered the highest on the planet but was dethroned by the Himalayan and Peruvian peaks. According to the Earth’s geometry, however, the summit of Chimborazo is considered to be the farthest from the Earth’s centre.  This huge mountain is the highest point in Ecuador and has the highest peak near the equator at 6268 metres.

We didn’t do the ‘full monty’ overnight-reach-the-summit hike but decided to do a day hike instead. We took the bus from Guaranda and were dropped off approximately an hour later at the Chimborazo (Reserva de Produccion Faunistica) entrance.  Our approximately 8-hour return trip would begin at 4370 metres. We were off!

As we walked and breathed in the progressively thinning air, we were rewarded with blow-your-socks off views, and believe me, the wind was already doing a pretty good job at that! The terrain leaves you with your mouth wide open and the views of the volcano are nothing short of spectacular. Add to that the multitude of grazing vicunas along the way, it really made for a jaw-dropping sight.

By the time we reached the second refuge at around 5000 metres, I could definitely feel the altitude, whilst Alex’s body, being from Quito (second highest capital on Earth), seemed to be going into cellular memory recall. We stopped and had a hot chocolate and some sweets before setting off to reach the lagoon, only 100 metres further uphill.

Only another 100 metres uphill! Well, I must say, they were some of the hardest metres I have ever
walked. I could really feel the altitude, and I know that I was getting slight altitude sickness, as I felt not so much short of breath, but a tad queasy.  Nothing too serious, I was determined to get to the top. After trudging, stopping every few metres and Alex constantly urging me on, we made it to the top! It was never going to be any other way with me, was it?

After some fun at the top and some obligatory, ‘I made it to the top shots’, we were on the way back down. Again though, as being at an altitude of 5100 had taken its toll, the first 200 metres going  back down weren’t exactly easy either.  After that, with downhill all the way, it was really quite pleasant with yet more breathtaking views. We jumped on a Guaranda-bound bus soon after, and according to Alex’s shoulder, I had a great ride back. Zonked, exhausted, wiped out … but oh so very worth it! Quite possibly had one of the best sleeps of my life that night!

After Guaranda, it was on to do the infamous Quilotoa Loop.  Again, it’s one of those things that despite several trips to Ecuador since I met Alex in 1999, I have never got around to doing. It’s been on my bucket list forever! The Loop is a bumpy, roughly round-shaped road which meanders into the backcountry of Chimborazo province, high up in the Andes Mountains. You can walk or hike parts or go by transportation, although infrequent.  We did the former, well, we did a part of it anyway. We used transport where we had to but did a couple of spectacular day hikes between villages, ending up there for the night to sleep. Some people take guides, but most of the local hostales (places to sleep) have maps for independent travellers.

Starting off in Latacunga, only an hour and a half from the capital, we began our four day journey that would take us through windswept plains, colourful indigenous markets, a crystal-blue lake which locals believe has no bottom, past, but not through) Tigua (a town and community of painters who are preserving the legends of the Andes with their intricately painted scenarios on sheep skin hides) and finally ending in Saquisili.  This market starts early, very early, and is one of the country’s largest and most colourful indigenous markets. Every Thursday hundreds of indigenous people from the surrounding areas come to sell and barter their wares, selling everything from pots and pans to pigs and goats. It is indeed very well known for its animal market.  Animal lovers beware!  The whole scene can be quite confronting!

We spent our first night in the windswept town of Quilotoa, right near the rim of the spectacular lake. We not only walked down to the bottom, but around the rim as well.  Next, was hiking on to Chugchilan, and finally on to Isinlivi. I want to make a special mention of the outstanding Taita Cristobal Guest House we stayed at; well priced, great food and warm owners. Each day of our hike involved several hours of walking, but not without spectacular views.  Below is the blog of a guy called Steve (nope, I don’t know him personally, just found him on the internet) who outlines his entire walk around the Loop.  If you are interested in doing it (which I think if you are in Ecuador you should!) it’s a great read:  Backpacker Report Quilotoa Loop

The loop definitely constitutes the road less travelled and its isolation brings you into contact with lots of Quechua (Kichwa) speaking indigenous people, their old customs and way of life.  These people could not possibly live a more different life than the modern day inhabitants of the capital and other big cities in Ecuador. We lived, we laughed, we learned and we shared. This is the beauty of travel … always!

And so, we were on our way to Quito … finally, to see our Ecuadorian family!

Next: An overview of what we’ve been doing (still!) on the road for the last year or so. 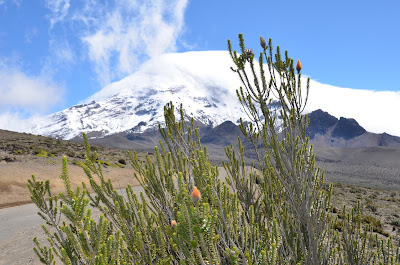 Do you have more tips, advice or suggestions on what to do in Paraguay? Please feel free to share your thoughts and comments below.

One Life, Live it!