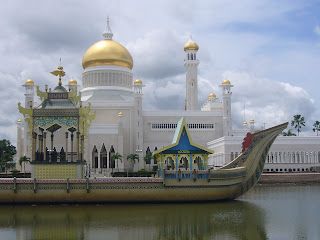 C’mon, give me a break…it was ABSOLUTELY time for another trip!  Hey, we didn’t go anywhere last Christmas, and we’d been to Ecuador way back in mid-1999, so we were about due.  To be fair, we’d already booked this trip to Malaysia with our friend Linda back in September 2009.  Keen, hey! What can I say…if you can’t physically travel immediately, the next best thing has got to be making the booking!  OK, OK, I don’t even try and hide it anymore…I’m a travel junkie!

This triptook us to Borneo and Brunei Darussalam 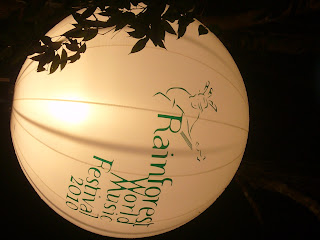 Linda had told us about the Sarawak Rainforest World Music Festival in Borneo and it all sounded very exciting to Alex and I.  The Rainforest World Music Festival is a unique festival that brings together renowned world musicians from all continents as well as indigenous musicians from the island of Borneo. It has been going for approximately eight years and its success has largely been due to all of the volunteers, both international as well as local, who freely give up their time to help out. 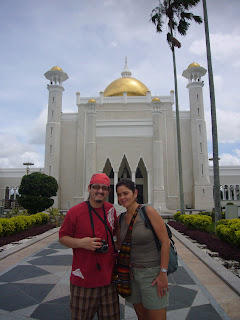 Linda asked Alex and I if we would be interested in volunteer…HELL YEH!!!  That took hardly any convincing at all; Linda showed us the website (she also has lots of contacts there, and the Andean band she manages in Australia, Inka Marka, have played there before)…and we were immediately sold!  Linda then proceeded to use her contacts, and in no time at all, it was official…Alex and I would be volunteers!  It was an easy sell – whilst I had been to Malaysia, I had never been to Borneo (part of which is Malaysia), and Alex had never been to either.  Of course, I am always up for a new country and a new experience.

Linda also mentioned Brunei and the Empire Hotel and Country Club…Where?…What?  The Sultanate of Brunei is a tiny Muslim country nestled between Sabah and Sarawak on the island of Borneo, and the Empire Hotel and Country Club is its 5-star hotel centrepiece.  Whilst I have never had a huge desire to travel to Brunei, we decided to go there, as we were already going to be so very close. Staying in a 5 star plus hotel?  Linda had been there before with her band (Inka Marka), and said it was worth the splurge. With some really decent online deals, we decided to “OTT” (over the top) it, and act like royalty, well at least sultans, for a day…or two. 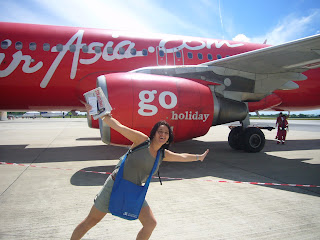 This speaks for itself!

Good old’ Air Asia.  Flying ain’t what it used to be!  Once we booked our Melbourne – Kuala Lumpur return tickets, we were able to get our internal tickets quite cheaply, which allowed us to see a fair bit of Malaysia (Sarawak in Borneo and Penang on the mainland) and Brunei in just two weeks.  As usual, we packed a lot in.  Cheap sometimes comes at a cost, however, with Air Asia changing the internal flight times so often that we lost count. It’s all good if there is no urgency to be at a certain place at a certain time, but if you have a tight deadline, I would definitely recommend another carrier.

Linda drove to our place, where she left her car, and Dad drove us all to the airport.  We had pre-flight drinks (coffee!) and then boarded the plane.  We’d done our homework – food isn’t free on these flights, so we came armed with sandwiches wrapped in foil and a host of other delectables which would hopefully keep our taste buds happy.  I reminisced about my primary school days where the “wogs” would try and hide the foil and want to spear their parents for giving them salami or prosciutto in continental bread rolls…if they were lucky they could swap with one of the Aussie kids and score a vegemite sandwich (sliced, doughy, white bread).  I laughed out loud..these days, WHO would swap salami in a continental bread roll for vegemite in tip-top bread?  Multicultural Australia…we sure have come away!

The Empire Hotel…no luxury spared flight was good, no problems at all.  Once we arrived in KL, we had to wait a few hours before flying on to Bandar Seri Begawan (BSB), the capital of Brunei (whose official name is actually the State of Brunei Darussalam).  Linda had her laptop with her, so we filled in our time by sitting in a cafe, and sipping on coffee (as you do), whilst using the free wireless provided.  You can never have too much coffee or wireless internet access for that matter!  Soon back on a plane, we were on our way to Brunei.

We arrived in BSB late in the afternoon, and promptly caught a taxi out to the Empire Hotel and Country Club. I had seen their website and read up on it, but nothing could prepare me for what I was about to see. OMG…OTT!!!  Translation – Oh My God…Over The Top!  The Lonely Planet Malaysia, Singapore and Brunei guide got the description down pat – “Imagine a zillion-tonne hunk of Italian marble dipped in gold and tossed into the rainforest – you’ve just picked the fanciful Empire Hotel and Country Club”. Couldn’t have described it better myself!  We entered the grandiose gates, passed a lot of highly manicured lawns, the entrance to the golf course, the quote, health club, unquote (health club I said, NOT gym!)…and they were left outside the grandiose doors of the hotel.  And there the three of us stood, looking very much the backpackers.  What can I say?  Oil and water?  Never the twain shall meet, or mix at least.  I felt like I had been dumped outside Buckingham Palace in my bikinis!

Once inside I couldn’t help but be overawed by the opulence (our three-day stay here would provide me with many more OMG moments!) of the place but decided that, hey I was here, so just enjoy it. As the saying goes…if you can’t beat ’em…join ’em!  We were promptly taken to our oceanfront rooms, and I must say they were luxurious indeed. The hotel really did have it all…various swimming pools, ocean access, various restaurants, massage, spa…just to name a few things.  It truly was a city within a city. The only downfall was that it was far enough from the city centre to make taking taxis in and out rather expensive, and buses were quite infrequent (A) because the number of cars per person in this small country is astounding and (B), which is actually a result of (A), public transport is scarce and infrequent.

On the Empire Hotel:  It was built in the 90s on the same scale as a Las Vegas Casino, and was commissioned by Price Jefri, originally as lodging for the royal family (talk about putting a new spin on private accommodation!).  Construction costs were estimated at US $1.1 billion, and the property was quickly transformed into an upscale resort to recover some of the construction costs…word has it that this will never actually happen!  Amongst many other things, the hotel boasts two camel-shaped lamps made from pure Baccarat crystal, topped with solid gold…they cost a mere US half a million each!  Now that is an extravagance!


Apart from soaking in the many outdoor pools, we actually had a lovely time in Brunei, spending a bit of time in the city centre, and checking out some sights.  Whilst Muslim, it is not as conservative as many of its middle eastern cousins.  Having said that, it is always both polite and courteous to observe the dress code of those around you.  When in Rome, do as the Romans.  We were very lucky to get a personalised tour on our second day, as Linda has a friend who works in Brunei Tourism.  Chris Robles met us at the hotel and then spent a day driving us around the main sites, which meant that we got to see quite a bit, including the main sites. Without a car, for reasons previously.

explained, this would have been really difficult.  Some of the highlights were the Royal Regalia Museum (basically a celebration of the sultan and all the trappings of Bruneian royalty), the Brunei Museum (giving a great overview of the country and its people as well as the brilliant Islamic Art Gallery) and the Jame’Asr Hassanil Bolkiah Mosque, which was built in 1992 to celebrate the 25th year of the current sultan’s reign.  The sheer volume of the place was amazing and the myriad of  woven rugs scattered across the men’s prayer hall astounding.  Amongst all of this we stopped for both a buffet lunch and some decent coffee.  When Chris dropped us off back at the hotel, we were knackered.  We thanked him for his kind hospitality, and made our way to the pools, for a relaxing finish to our day.

The next day we made our own way into the city centre and wandered around.  We seemed to not only be the only tourists, but the only ones walking around, and I must say, it was pretty hot.  That couldn’t possibly have been the reason!  We visited the Omar Ali Saifuddien Mosque,  (built in 1958 at a cost of about US $5 million…then!  They don’t go by halves in this country!), another very aesthetically pleasing monument.  Alex and I also walked around Kampong Ayer.  Right in the centre, this water village is an amazing juxtaposition to the many lavish buildings which surround it.  Just minutes away from the Omar Ali Saifuddien Mosque, is a jumble of wooden planks and shacks, considered to be the biggest water village in the world.  Housing an estimated 20,000 people, Kampong Ayer is made up of 28 water villages.  As we wandered and meandered around the walkways, and on many a  broken plank high enough above the water to make the idea of tripping over positively frightening, I couldn’t help but be amazed how poverty could reside so close to luxury.  I alternated between looking at the rotten planks below me, and then looking out to the city from which I had just walked.  What a contrast!

It was mid-afternoon and getting rather hot (hmm, well, hotter!)  We walked back to the centre, where we met Linda, and then just browsed around, stopping at some shopping centres, as well as refuelling on coffee.  I cannot say that the shopping was overly exciting, and we didn’t really buy much apart from some food.

Our three nights and four days in Brunei passed in a flash, and before we knew it, we were on a plane flying out to Kuching, where we would be volunteering at the Sarawak Rainforest Music Festival.  Whilst I was glad that I had seen Brunei and had seen and done some interesting things, I cannot say that it tops my “5 places to re-visit” list.  Interesting enough it’s kind of more in the been there, done that category!

What am I reading?
The Havana Mob – T.J. English